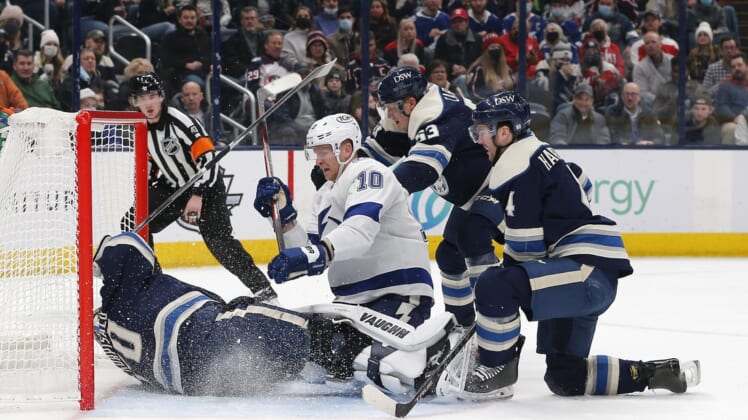 Tampa Bay’s Ondrej Palat scored the game’s first two goals in his three-point night as the visiting Lightning broke their three-game skid Tuesday in a 7-2 blowout of the Columbus Blue Jackets.

Brayden Point also posted three points with a goal and two assists, and Corey Perry and Pat Maroon each had a goal and a helper for the Lightning, who won their fourth straight over Columbus.

Pierre-Edouard Bellemare and Alex Killorn scored in the third to round out the scoring, and Anthony Cirelli had two assists.

In his second start since returning from COVID protocol, Andrei Vasilevskiy (18-5-3) turned aside 20 of 22 shots to win for the 10th time in his past 12 starts.

Gustav Nyquist logged a goal and an assist for Columbus, which lost in regulation at home for the second time in its past eight games (5-2-1) and has one victory in its five recent outings (1-4-0).

Playing his first game since fracturing his wrist on Oct. 25, Dean Kukan potted his first goal.

In his first start in goal since Nov. 27, Joonas Korpisalo surrendered seven tallies on 36 shots.

Palat put the visitors in good shape in an impressive opening 20 minutes.

With Tampa Bay on its first power play, Palat took Point’s pass and zipped in a tally to make it 1-0 at 4:53.

On Tampa Bay’s second man advantage, Perry cleaned up a loose puck around Korpisalo and recorded his ninth marker at 17:27 for a commanding 3-0 lead.

In the second, Kukan’s putback just 37 seconds in was offset by Point’s 11th goal 59 seconds later, but Nyquist’s patient play on Vasilevskiy ended with him roofing his seventh at 4:16 to trim the deficit to 4-2.

Maroon helped the visitors regain the three-goal lead when he backhanded in a rebound from the low slot on the power play.