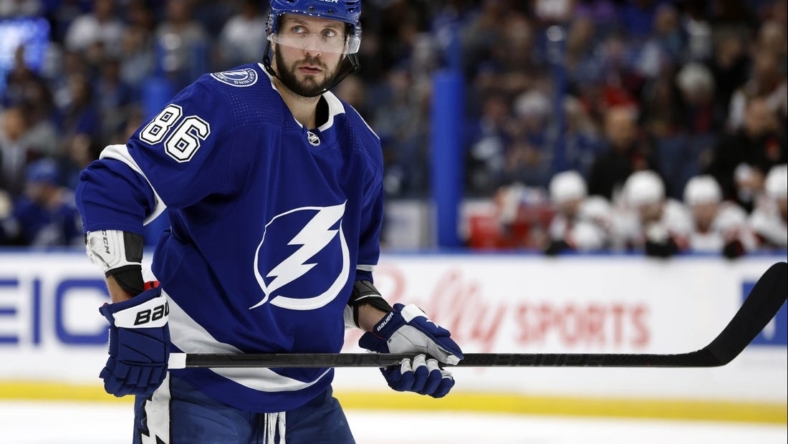 Nikita Kucherov scored the tiebreaking goal late in the third period Tuesday as the Tampa Bay Lightning opened their four-game homestand with a 4-3 comeback win over the Ottawa Senators.

With the teams locked in a 3-all tie, Kucherov — who also had two assists — one-timed a shot from the right circle off a feed from Mikhail Sergachev for the game-winning marker with 2:30 remaining.

Ottawa captain Brady Tkachuk missed a point-blank chance with one second to go as the visitors lost their fourth straight match, while Tampa Bay won its third consecutive.

Kucherov’s three-point showing stretched his point streak to eight games and helped his club win for the ninth time in the past 12 outings against Ottawa.

Sergachev and Brayden Point had a goal and an assist and Alex Killorn also scored. Steven Stamkos had two assists and Andrei Vasilevskiy stopped 12 shots.

The Lightning played without former Norris Trophy-winning defenseman Victor Hedman, who is listed as day-to-day with an upper-body injury.

Ottawa’s Dylan Gambrell scored in his season debut but was later ejected. Mathieu Joseph and Claude Giroux tallied and Anton Forsberg made 30 saves as Ottawa went 7-for-8 on the penalty kill.

In the first period, Lightning defenseman Nick Perbix sent a pass that bounced to Gambrell. Playing in his first game, the Ottawa center beat Vasilevskiy at 5:44 on the Senators’ first of three shots in the frame.

But Ottawa allowed the home side to cash in on its third power play at 3:17 of the second. Sergachev blasted home a shot for his second tally to tie it at 1.

Gambrell was ejected with a match penalty after a side hit on Erik Cernak struck the defenseman in the head. However, the Lightning could not take advantage of the five-minute major infraction, which included 95 seconds of a five-on-three advantage.

It got worse for the Lightning. Late in the two-man advantage, Joseph — who played four seasons for them — won a race with Stamkos to a loose puck and scored short-handed on a breakaway at 12:21.

With 8:56 left in the match, Killorn netted his third goal to knot it at 2, but Tkachuk’s thievery of Vasilevskiy from behind the net allowed Giroux to notch his third of the season 40 seconds after Killorn’s.

Point streaked through the slot 1:11 later and tied it for a third time with his fifth tally.