Lightning rule out Stamkos for rest of Stanley Cup Finals 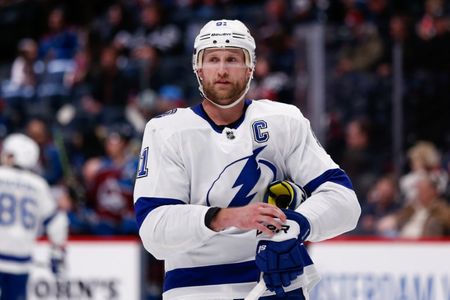 (Reuters) – Tampa Bay Lightning captain Steven Stamkos will not play again during the Stanley Cup Finals, head coach Jon Cooper said on Sunday, adding the next time the team’s top star might be seen on the ice is during the trophy presentation.

The Lightning, who lead the best-of-seven final 3-2, will have a chance on Monday to clinch the franchise’s second Stanley Cup when they face off against the Dallas Stars in Game Six in Edmonton, Alberta, one of two COVID-19 bubbles used by the National Hockey League for the postseason.

Dallas staved off elimination with a 3-2 win in double overtime on Saturday night.

Recovering from March surgery to repair a core muscle injury, Stamkos has been limited to five shifts and just under three minutes of ice time during the playoffs. But he made them count, scoring a key goal in the Lightning’s Game Three win that allowed them to take a 2-1 series lead.

“Stammers is done for the series,” said Cooper, adding he discussed the situation with Stamkos earlier on Sunday. “Hopefully the next time you see him on the ice, it will be for the trophy presentation.”

As team captain, Stamkos would accept the Stanley Cup if the Lightning win the championship.

“He did everything he could to get back and he did get back. Unfortunately, he couldn’t go any further,” Cooper said.

“He’s for sure missed on the ice but the rest of the series is done for him.”

With the series tied 1-1, Stamkos, twice a winner of the Maurice Richard Trophy as the NHL’s top goal scorer, provided a huge emotional lift, scoring seven minutes into the opening period of Game Three to put Tampa ahead 2-0.

Stamkos did not play during the final six minutes of the first period and never took another shift the rest of the game.

“To be honest, I didn’t think he was going to play at all in these playoffs,” said Cooper. “I don’t think any of us did, so he gave us 2:47 of brilliant hockey that is a phenomenal story, scored a huge goal for us in a win and hopefully we can keep that momentum moving forward.”

(Reporting by Steve Keating in Toronto; Editing by Peter Cooney)