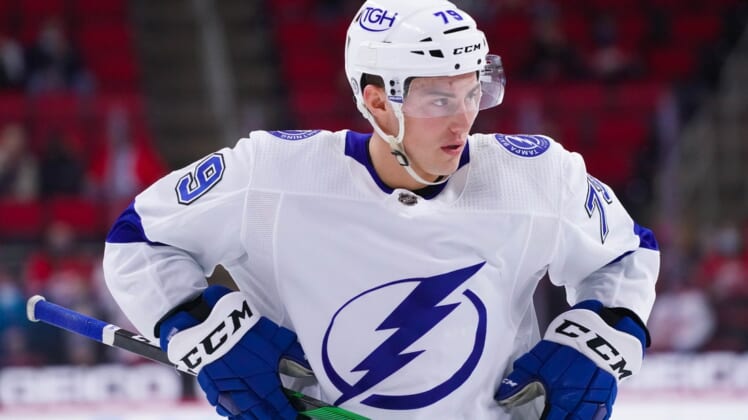 The Tampa Bay Lightning have found a regular though unexpected contributor on the scoresheet lately — rookie Ross Colton.

With his club trailing 2-1 Thursday and on the verge of being swept at home by the Columbus Blue Jackets, Colton wristed in a wicked goal from the left dot to beat goalie Elvis Merzlikins to even the contest.

Brayden Point provided the game-winning goal with 4:06 remaining as Tampa Bay snapped its season-worst three-game losing streak with a 3-2 win.

On Saturday in Tampa, the Lightning will host the Detroit Red Wings in the first of back-to-back matinee games between the teams over the Easter weekend.

Thursday’s game winner may not have been the way it was drawn up, but the goal was effective.

On an odd-man rush, Point attempted to slip a centering pass over to Tyler Johnson. However, Columbus defenseman David Savard made a sliding attempt to break up the play, and the puck inadvertently beat Merzlikins after Savard swiped his stick backward on the ice.

While Point tallied the Lightning’s first and final goal, he said he was excited to see Colton bring the crowd of 3,800 fans to life and spark the comeback victory.

“It’s great to see a guy who’s worked hard. He works hard in practice; he does all the little things right, and to see him have success is awesome,” said Point, who has 10 goals, eight assists and is plus-14 in his last 10 games against the Blue Jackets.

A native of Robbinsville, N.J., Colton produced his third goal in his 10th career NHL game, and two of the markers have been game winners. The 24-year-old fourth-line center also has three assists.

The Lightning are 3-1-0 against Detroit this season and have outscored them 16-11 overall.

Victor Hedman had a stick-save at the goal line on a potential marker in the second period and broke his three-game drought without a point. Andrei Vasilevskiy made 36 saves to tie Colorado’s Philipp Grubauer for the NHL’s lead in wins with 22.

In Sunrise, Fla., on Thursday against the Panthers, the Red Wings pretty much played the role of Columbus — owning a 2-1 lead in the third period but seeing it slip away.

However, the Red Wings pushed hard at the end, nearly produced their own game winner and managed to force overtime — gaining a point — but fell victim to a one-timer by Florida’s Alex Wennberg at 1:25 to lose 3-2.

Despite sweeping a two-game home set against Columbus last weekend, the last-place Red Wings dropped to 2-4-1 in their last previous seven matches in the Central Division.

Detroit coach Jeff Blashill said a pair of third-period penalties midway through the frame by his group was costly. Florida’s Frank Vatrano evened the score at 2 just six seconds into the second man advantage.

“Obviously, you don’t want to take two penalties in a row,” Blashill said. “It’s hard to kill penalties, especially two in a row. (Florida) started to be able to work different stuff.”

In the Red Wings’ sixth loss in eight games against Florida this season, Adam Erne and Anthony Mantha scored, Patrik Nemeth registered two assists and Givani Smith participated in a pair of fights in the physical contest.