Lightning, Isles heading in opposite directions ahead of clash 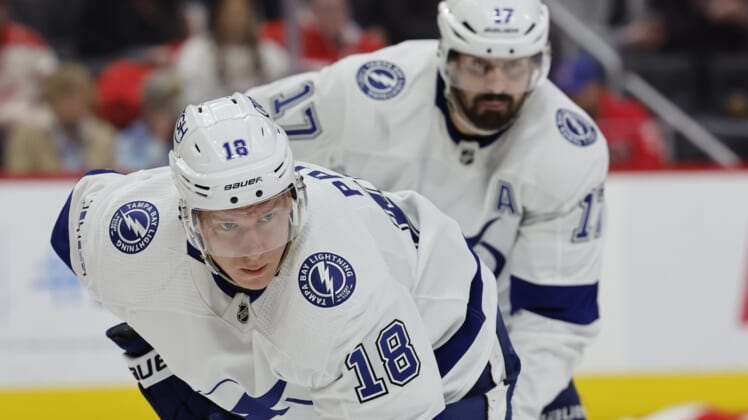 The first game between the host New York Islanders and Tampa Bay Lightning at UBS Arena is going to be a little different — and, with a lot less riding on the outcome, a lot calmer — than their most recent and last meeting at Nassau Coliseum.

The defending Stanley Cup champion Lightning will make their first visit to Long Island since last June’s NHL semifinals Sunday afternoon, when Tampa Bay is slated to face off against the Islanders in Elmont, N.Y.

Both teams will be completing back-to-back sets after playing road games Saturday afternoon, when the Islanders fell to the Boston Bruins 6-3 and the Lightning edged the Detroit Red Wings 2-1 in overtime.

The rivals have traveled different paths this season after facing off in intense playoff semifinals the last two seasons, when the Islanders were the Lightning’s biggest obstacle on their way to consecutive Stanley Cups.

Tampa Bay earned a six-game win in the Edmonton bubble — with the decisive 2-1 victory coming in overtime — in September 2020 before outlasting New York in seven games last year, when Yanni Gourde’s short-handed goal provided the only tally in the 1-0 Game 7 victory.

That Game 7 was necessitated by a stirring comeback by the Islanders in Game 6. They overcame a two-goal deficit and ensured they would not close Nassau Coliseum — the franchise’s on- and off-again home since debuting in the NHL in 1972 — with a loss when Anthony Beauvillier scored 1:08 into overtime to give the hosts a 3-2 win.

The goal set off a raucous celebration at the Coliseum, where Beauvillier slid on his knees before being engulfed by teammates as beer and debris rained down from the sellout crowd of 12,000.

The Islanders maintained most of their core in hopes of finally taking that next step. But an 11-game losing streak in the midst of a COVID-19 outbreak from Nov. 7 through Dec. 5 put New York into a hole from which it hasn’t been able to escape.

After Saturday’s loss — which dropped New York 19 points behind the Washington Capitals in the race for the second wild card in the Eastern Conference — Brock Nelson said the Islanders were looking forward to the reunion with the Lightning.

“It will be a good chance to see what this group is all about,” Nelson said. “I know we believe in one another to have bounce-back games.”

The Lightning are all but assured of getting a chance to become the first three-peat champion in the NHL since the Islanders won four in a row from 1980 through 1983. But a late-season slump may make the road tougher for Tampa Bay, which won for just the third time in nine games (3-6-0) Saturday and enters Sunday third in the Atlantic Division — one point behind the second-place Bruins and one point ahead of the Toronto Maple Leafs.

The Lightning, which squandered a pair of one-goal leads in Thursday’s 3-2 loss to the Bruins, were in danger of falling to the Red Wings before Steven Stamkos scored the tying goal with 4:38 left in regulation. Brayden Point won the game by scoring on the power play at the 2:32 mark of overtime.

“This was a big win for us,” Lightning head coach Jon Cooper said. “Today we talked about making sure we stayed engaged even if they got the lead. I think we actually played our best hockey after they went up 1-0.”