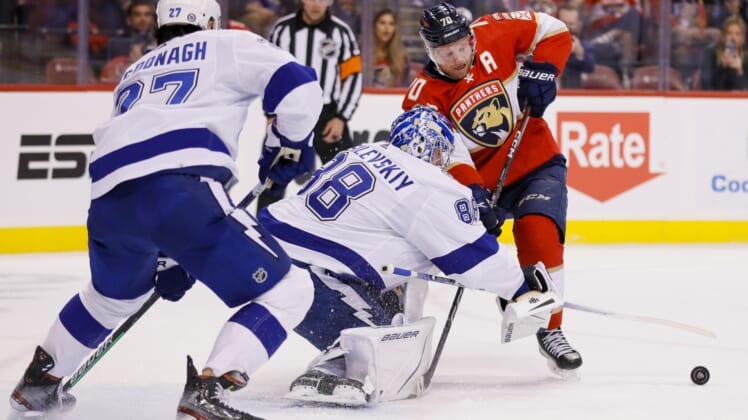 Nicholas Paul scored twice, including a sensational short-handed goal to put his team up for good, as the Tampa Bay Lightning defeated the host Florida Panthers 8-4 on Sunday night at Sunrise, Fla.

Paul’s go-ahead goal was set up by Brandon Hagel, who beat Panthers star Aleksander Barkov to a loose puck behind Florida’s net. Hagel took a quick look behind him before passing to a charging Paul. From there, Paul slipped the puck between his legs before lifting it above goalie Spencer Knight’s blocker.

Florida got two goals from Sam Reinhart and one each from Brandon Montour and Mason Marchment.

Andrei Vasilevskiy made 34 saves for the Lightning.

Knight was pulled with 7:01 left in the second period. He allowed five goals and made 12 saves for the Panthers. Sergei Bobrovsky finished the night in goal, allowing three goals and saving 13 shots.

Tampa Bay opened the scoring with 2:37 gone in the first. After a pass from Pat Maroon, Kucherov roofed the puck from the right circle.

The Panthers tied the score less than two minutes later as Reinhart scored off the rush. Reinhart used Lightning defenseman Mikhail Sergachev as a screen, surprising Vasilevskiy with the quick shot.

Tampa Bay took a 2-1 lead on Stamkos’ power-play goal at 6:44. Stamkos took a pass from Victor Hedman and scored on a one-timer from the left circle.

With 5:02 left in the first, Tampa Bay extended its lead to 3-1 as the Lightning worked a two-on-one rush, finishing with Hagel’s pass and Foote’s goal.

Florida tied the score just 59 seconds into the second period as Claude Giroux lofted a pass ahead toward Marchment, who extended his stick and batted in the bouncing puck.

But Paul scored the go-ahead goal with 5:28 elapsed in the second.

Then, with 12:59 expired in the second, Paul scored again. This time, he stole the puck and attempted a pass to Alex Killorn, but Knight tried to intercept the pass and the puck went in off his stick for a 5-3 Lightning lead.