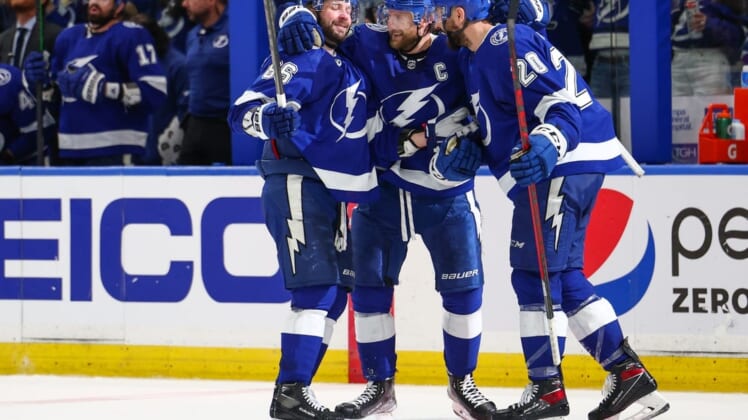 The Tampa Bay Lightning can return to the Eastern Conference Finals for a third straight season with a victory against the visiting Florida Panthers in Game 4 of their second-round series in the Stanley Cup playoffs on Monday night.

The Lightning took a 3-0 series lead with a 5-1 win against the Panthers in Tampa on Sunday afternoon, the third straight game they limited Florida to one goal.

The Tampa Bay defense has been anchored by goalie Andrei Vasilevskiy, who has not only held the Panthers to one goal in each of the first three games, but limited the Toronto Maple Leafs to a single score in a 2-1 win in Game 7 of their first-round series on May 14.

“He’s the backbone right now,” Tampa Bay forward Nicholas Paul said of Vasilevskiy. “He gives us the wind in the sail.”

Florida owned the best record in the NHL during the regular season (58-18-6, 122 points), but hasn’t managed to solve the two-time defending Stanley Cup champions.

In addition to Vasilevskiy, the Panthers haven’t found an answer for Lightning veteran forwards Nikita Kucherov or Corey Perry.

Kucherov, who led the Lightning in scoring the past two postseasons, had a goal and three assists in Game 3 to give him two goals and five assists in the series. He also has a team-leading 15 points (four goals, 11 assists) in 10 playoff games this postseason.

Perry has a goal in each of the first three games of the series to give him 50 playoff goals in his 17-year NHL career.

Perry, who turned 37 last week, scored the first goal in Games 2 and 3, giving him 13 goals to start a playoff game in his NHL career, which is second among active players behind Sidney Crosby of the Pittsburgh Penguins (16).

“When you fall behind to these guys, it’s tough to come back,” Brunette said

Tampa Bay captain Steven Stamkos, who scored two goals on Sunday to give him points in all three games of the series, said the Lightning aren’t hesitant to roll with all four lines.

“Whatever guys are on the ice, we have full trust in that,” Stamkos said.

Huberdeau tied for second in the NHL with 115 points (30 goals, 85 assists) during the regular season, but has been limited to one goal and four assists in nine playoff games.

Sam Reinhart scored the lone goal on Sunday for the Panthers, but it was just his fourth point (three goals, one assist) in nine playoff games after totaling 33 goals and 49 assists during the regular season.

“It’s tough not to get frustrated,” Reinhart said. “I think there’s certain things we’re doing well, but just not enough bodies around the net to pick up those loose opportunities.”

Reinhart said it helps that the Panthers will have a short turnaround heading into Game 4.

“We’re back at it again (Monday),” Reinhart said. “You don’t want much time in these situations to think about it too much. You just want to go out there, play and put on a better performance.”