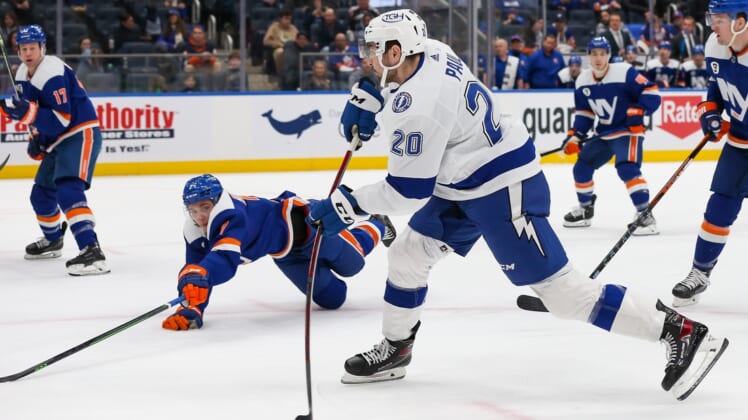 Victor Hedman and Alex Killorn scored fewer than nine minutes apart in the second period Sunday afternoon in Elmont, N.Y. for the visiting Tampa Bay Lightning, who beat the New York Islanders 4-1 in the first game on Long Island between the teams since Game 6 of last June’s NHL semifinal series.

Ross Colton and Mikhail Sergachev added insurance goals in the third for the Lightning, who beat the Islanders in the NHL semifinals in each of the last two seasons on their way to back-to-back Stanley Cups.

Tampa Bay won both games of a back-to-back road set to jump from the first wild card in the Eastern Conference to second place in the Atlantic Division.

Goalie Andrei Vasilevskiy had 23 saves as well as an assist on Sunday.

Brock Nelson remained red-hot by scoring in the first for the Islanders, who have lost two straight for the first time since a three-game skid from Feb. 11 through Feb. 15. New York is 19 points behind the Washington Capitals, who occupy the second wild card spot in the East.

Goalie Ilya Sorokin recorded 18 saves before exiting after the second period. Semyon Varlamov made 12 saves in the third.

The Lightning and Islanders wasted no time picking up where their budding rivalry left off last June, when the Islanders forced a seventh game in the semifinal series with a 3-2 overtime win in the final game played at Nassau Coliseum. The teams combined for 32 minutes of penalties Sunday afternoon, including 20 stemming from three different fights and near-fights.

Nelson gave the Islanders a brief lead by scoring his fourth goal in the last three games and his 12th goal of the month with 1:46 left in the first. But a tripping penalty on Zdeno Chara with 45 seconds left set up the period-spanning power play that resulted in Hedman tying the score 1:10 into the second.

A turnover by the Islanders in the neutral zone — Beauvillier couldn’t corral a pass off the boards by Ryan Pulock — led to Killorn beating Sorokin from point-blank range at the 9:47 mark.

The Islanders appeared to tie the game on a goal by Jean-Gabriel Pageau with 14.8 seconds left, but it was waved off on review because Kyle Palmieri was offsides.

Colton tucked home a rebound 9:10 into the third and Sergachev scored on a back-handed rebound with 3:04 left.