Lightning cruise past Rangers, even East finals at 2-2 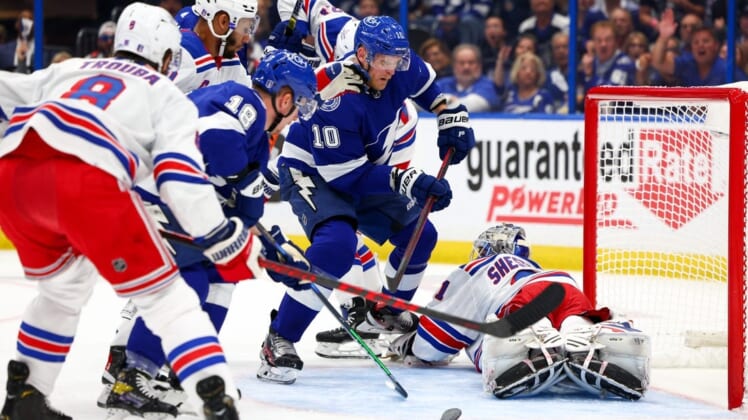 Ondrej Palat had a goal and two assists to help the Tampa Bay Lightning earn a 4-1 win against the visiting New York Rangers on Tuesday night, leveling the Eastern Conference finals at two wins apiece.

Pat Maroon, Nikita Kucherov and Steven Stamkos also scored while Andrei Vasilevskiy made 33 saves for the Lightning, the two-time defending Stanley Cup Champions who lost the first two games of the series in New York before winning the past two at home.

Artemi Panarin scored and Igor Shesterkin made 27 saves for the Rangers, who scratched center Ryan Strome shortly before the game because of a lower-body injury and lost center Filip Chytil to an upper-body injury late in the second period.

Strome was a 21-goal scorer during the regular season, and Chytil had three points in the first two games of this series.

Game 5 in the best-of-seven series is scheduled for Thursday night in New York.

Tampa Bay fourth-line right winger Zach Bogosian skated through the right circle, cut between New York teammates Ryan Reaves and Justin Braun, then tried a backhand from in close. That shot was saved, but Maroon skated in and swiped the bouncing puck past Shesterkin.

Maroon is trying to become the only active NHL player with four Stanley Cup titles.

The Rangers lost possession trying to come through the neutral zone, and Palat passed to Kucherov for a breakaway goal.

It was the 50th point at home for Kucherov in the past three postseasons, as he joined Mario Lemieux and Wayne Gretzky as the only players to accomplish that feat over the past 35 years.

Stamkos put Tampa Bay ahead 3-0 at 4:56 of the third, scoring from in close off another feed from Palat.

Vasilevskiy was denied his second shutout of this postseason when the Lightning went on a power play and pulled Shesterkin for a two-man advantage and Panarin scored with 3:33 left.

Palat scored into an empty net with nine seconds remaining to make it 4-1.