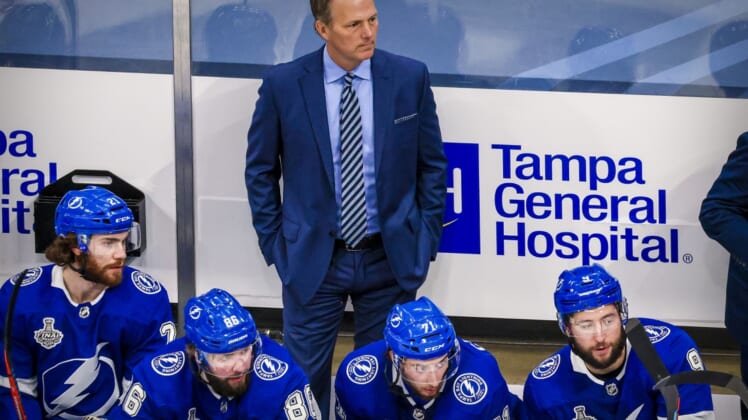 Tampa Bay Lightning coach Jon Cooper has cleared COVID-19 protocol and will be behind the bench for Thursday night’s road game against the Florida Panthers.

“I can only speak for myself but what I went through, it was extremely frustrating to have to sit on (the) sidelines here for the past eight or nine days,” Cooper told reporters after the morning skate, “because what I have felt during this time, I’ve felt many times worse, at many different times in my life.

“I think if you ask most of the players, if not all of them, they will probably tell you the same thing.”

Cooper tested positive while the Lightning were on the road and he watched that night’s 4-3 win over the Vegas Golden Knights from a hotel room in Las Vegas.

After the NHL break for the holiday, lengthened by COVID-19 concerns, Cooper watched Tuesday’s 5-4 overtime home win over the Montreal Canadiens with his family.

“That was a first,” said the 54-year-old Cooper, who has guided the Lightning to back-to-back Stanley Cup crowns.

Tampa Bay also activated center Pierre-Edouard Bellemare from the COVID-19 list on Thursday. Bellemare said he had no symptoms despite his positive test.

The Lightning currently have nine members of the organization in the protocol. The others are goaltenders Andrei Vasilevskiy and Brian Elliott, center Anthony Cirelli, defensemen Mikhail Sergachev and Andrej Sustr, and assistant coach Rob Zettler.