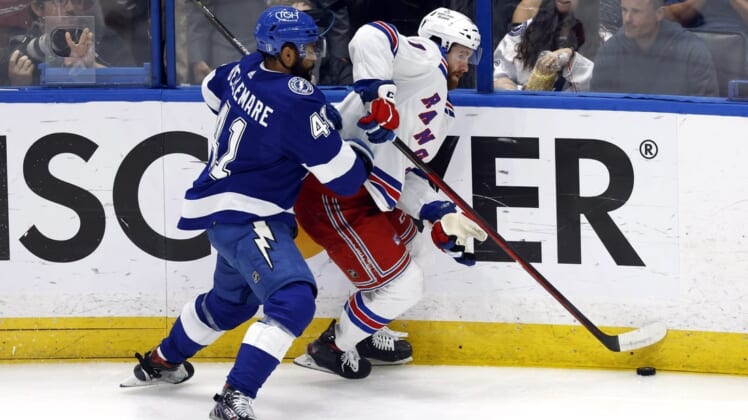 Steven Stamkos scored twice to lead the host Tampa Bay Lightning to a thrilling 2-1 victory over the New York Rangers on Saturday and send them to the Stanley Cup Final with the opportunity to claim their third consecutive title.

The Lightning — who have won 11 consecutive playoff rounds, the third longest run in NHL history — will face the Colorado Avalanche in the Stanley Cup Final, which kicks off Wednesday in Denver. It’s Tampa Bay’s fifth trip to the championship round.

The Lightning, who have won seven consecutive home games, are the first team to reach the Cup Final in three consecutive seasons since the Edmonton Oilers in 1983-85.

Frank Vatrano replied for the Rangers. Goalie Igor Shesterkin made 29 saves in a brilliant performance, but it wasn’t enough to prevent his team from losing a fourth consecutive game after winning the first two of the series.

Stamkos netted the game-winning goal just 21 seconds after Vatrano tied the game in the third period.

The Lightning captain’s shot off the rush was stopped, but Stamkos headed to the net and the rebound banked off his body and into the cage for his ninth goal of the playoffs with 6:32 remaining in regulation. It was the 41st playoff tally of his career.

From there, Vasilevskiy shut the door.

The Lightning controlled play from the drop of the puck. They finally solved Shesterkin when Stamkos opened the scoring just past the midway point of the second period when he raced down the right wing and converted a wrist shot from beyond the top of the right circle.

Vatrano’s power-play goal at 13:07 of the third period tied the game. After a won face-off in Tampa Bay territory, Vatrano unloaded a one-timer from the point for his fifth goal of the playoffs.

The rest of the game was truly a goaltending duel. Vasilevskiy’s biggest stop came in the middle of the third period when Andrew Copp had a golden chance to tie the score.

Shesterkin did everything he could to give his team a chance. He denied Anthony Cirelli on breakaway chances late in the first period and early in the second period and a clutch stop on Brandon Hagel in the third period.