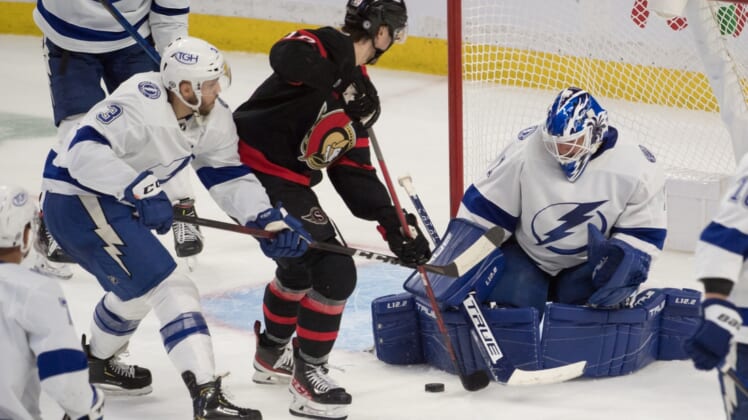 The Tampa Bay Lightning and Columbus Blue Jackets are eager to put their recent shortcomings behind them when they meet for the first time this season on Tuesday night in Ohio’s capital.

Amid a three-game losing streak, the Lightning likely are excited to get to Ohio and put the Florida Panthers and New York Rangers forward Mika Zibanejad in their rear-view mirror.

With Tampa Bay resorting to two AHL goalies because of COVID-19 issues, the surging Panthers got a five-point game from Jonathan Huberdeau and routed the Stanley Cup champions 9-3 Thursday, notching the most goals by a team against the Lightning since Carolina’s 9-3 blowout of them on March 7, 2009.

Tampa Bay backup goalie Brian Elliott returned Friday night against the Rangers, but the results were only marginally better: The Lightning lost 4-3 when Zibanejad scored the only shootout goal.

Lightning coach Jon Cooper summed up the monumental loss to Florida on Thursday by saying the six-goal defeat cut deeply.

“We gave up too many chances to a really good team that wanted to beat us,” the 10th-year Lightning coach said. “A team that we’ve handled and beat in the playoffs. They haven’t forgotten, and after tonight I won’t forget this.”

The home-and-home road losses to the Rangers left Cooper’s group 0-2-1 in its past three outings. Sunday’s shutout was the second against Tampa Bay this season.

Columbus has lost three straight matches against Tampa Bay — all last April — and had a similar bad experience its last time out on Saturday.

Carolina blitzed the host Blue Jackets by netting seven unanswered goals and racing to a 7-4 win — scoring four times in 3:57 in the third period for a 6-4 lead. The Hurricanes scored five times in the frame.

The defeat was Columbus’ first in regulation in its past seven home outings (5-1-1). The Jackets also lost for only the second time when scoring at least four goals (12-2-0).

But all wear different colors now.

“At some point in the game, we’ve got to take some pressure off our goalie and go play in the offensive zone,” the alternate captain said. “It seemed like the whole game, we were pretty much in our end.

“I think guys played hard tonight — it wasn’t for lack of effort — but at some point we have to work a little smarter and get the puck in their end.”

Werenski had a positive COVID-19 test Monday and left practice to be retested.

Goalie Elvis Merzlikins had discomfort and did not practice either. Also, goalie Daniil Tarasov (lower-body injury) was out after leaving the Carolina game.

Joonas Korpisalo was in goal for practice and likely will start Tuesday.