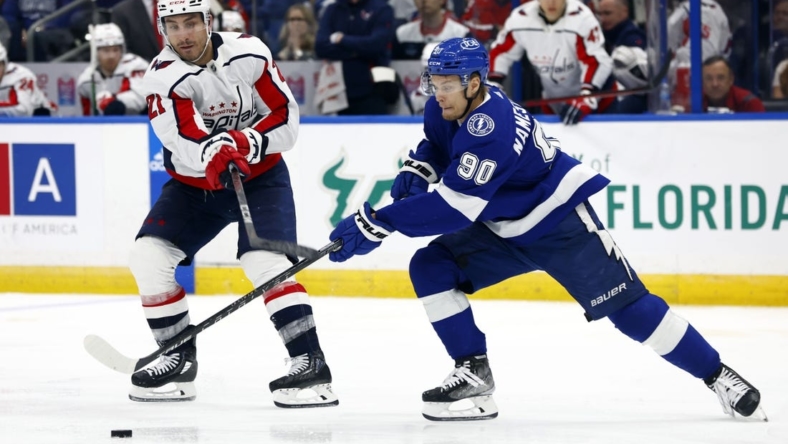 Mikhail Sergachev scored two of Tampa Bay’s four first-period tallies — all before Washington registered a shot on goal — as the Lightning beat the visiting Capitals 6-3 Sunday night in the second game of a home-and-home set.

Opening a three-game homestand, the Lightning received a goal and an assist from both Nick Perbix and Nikita Kucherov. Perbix, a rookie defenseman, stretched his point streak to a career-high four games.

Sergachev’s output in the first 20 minutes (two goals, two assists) matched a franchise record for most points in a period set by Martin St. Louis on Feb. 12, 2009.

Cole Koepke scored his first career goal in the third for Tampa.

Nicholas Paul scored, Steven Stamkos had two assists and goaltender Andrei Vasilevskiy stopped 19 shots. The Lightning went 6-for-6 in killing off Washington power plays — the same feat they turned against the club on Friday in a 5-1 loss.

The Capitals were without Nicolas Aube-Kubel, who received a three-game suspension after a head shot to defenseman Cal Foote in Friday’s testy affair. Coach Peter Laviolette (COVID-19 protocols) missed his second consecutive game.

Early in the first period, Sergachev floated a long shot from near the blue that clipped the hip of Washington center Dylan Strome and bounced past Kuemper at 1:23.

Just 21 seconds into the first power play, Kucherov one-timed a shot from the right circle for his seventh goal and a 2-0 lead.

Leading 6-0 in shots, the Lightning scored a third time — and second off a Capitals player — when Perbix sent a pass through the crease that struck the skate of Erik Gustafsson and caromed in for a three-goal margin at 11:12.

After Sergachev notched his fourth goal on the Lightning’s second power play, Kuemper was replaced in the crease by Lindgren.

In the second, the Capitals scored on a delayed penalty when Evgeny Kuznetsov whipped a pass over to Sheary for the left wing’s sixth goal at 18:04.

At 6:45 of the third, Koepke backhanded his first career goal. However, he wasn’t awarded the tally — which hit the post and camera inside the net before bouncing out — until teammate Brandon Hagel scored. The play was reviewed, with Koepke receiving his first NHL goal.

Eller, Paul (empty-netter) and Hathaway rounded out the game’s scoring.