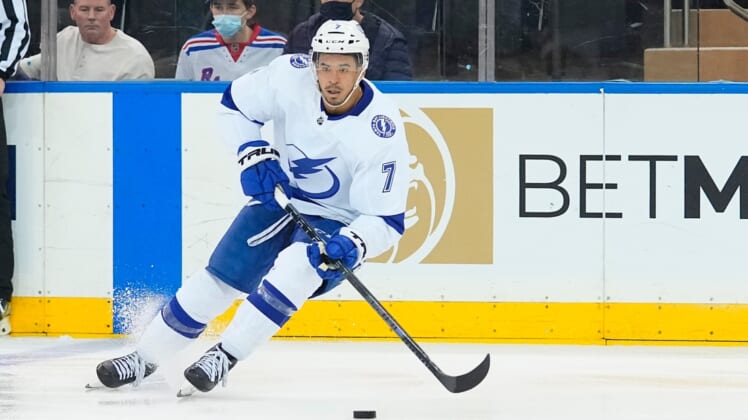 The good news for the Tampa Bay Lightning is that they have won three in a row heading into their three-game West Coast trip, beginning with a game against the Los Angeles Kings on Tuesday night.

The bad news is they’re woefully thin on the defensive end of the ice, especially on the right side.

The Lightning announced Monday that Zach Bogosian is expected to miss 2 to 3 weeks with a lower-body injury.

Additionally, Erik Cernak is questionable against the Kings after missing a 3-1 win against the visiting Dallas Stars on Saturday with a lower-body injury. Cernak was injured when he blocked a shot in the third period of a 4-2 win against the Vancouver Canucks on Thursday.

Jan Rutta had a maintenance day on Monday, leaving just five defenseman on the ice for practice.

“Our poor D are taking a beating,” Lightning coach Jon Cooper said. “I guess it’s the unfortunate side of things but, hopefully, we will get this out of us soon. A couple of weeks isn’t too bad. It’s a lot better than 6 to 8.”

Tampa Bay did not have any players in the NHL’s COVID-19 protocol as of Monday, but left wing Ondrej Palat remains day to day with an undisclosed injury that kept him out the past two games.

The Lightning hosted the Kings on Dec. 14 and won 3-2 in overtime on a goal by Mathieu Joseph.

Joseph continues to be a valuable asset for the Lightning, filling a variety of roles.

He replaced Palat on the top line against the Canucks on Thursday, playing alongside Nikita Kucherov and Brayden Point. Joseph then filled in on the third line on Saturday with Pat Maroon and Pierre-Edouard Bellemare.

“I think we’re a little bit everywhere this year, but you know what, I enjoy it,” Joseph said. “I get to play with some different guys out there and (learn) different ways to play offense and defense.”

The Kings will try to rebound after losing to the San Jose Sharks 6-2 on Monday. Timo Meier stung the Kings with a franchise-record five goals in the game.

Cal Petersen will likely start in goal after Jonathan Quick gave up six goals on 17 shots against the Sharks.

Petersen has been sharp in three starts since returning from COVID-19 protocol, allowing two goals in his past three games while stopping 60 of 62 shots for a .968 save percentage.

One of the bright spots in recent games has also been third-year defenseman Mikey Anderson, who scored against the Sharks to give him a point in three straight games.

“Mikey’s been doing a good job of getting up in the rush,” said his defense partner Drew Doughty. “We’re just looking for one of us to get up in the rush at all times and get involved in the O-zone.”

Los Angeles recalled forwards Jaret Anderson-Dolan and Samuel Fagemo, and defenseman Jacob Moverare, before the game against the Sharks.