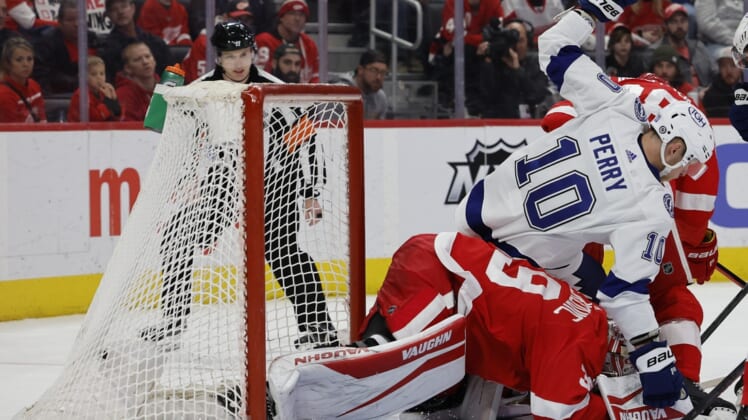 The Detroit Red Wings and Tampa Bay Lightning will meet for the fourth and final time this season on Tuesday night, with much more on the line for the reigning Stanley Cup champions from Florida.

After three tight games between each other so far, the final one will take place on the Lightning’s home ice as Tampa Bay continues to try to strengthen its seeding in the upcoming Eastern Conference playoffs.

Following two regulation losses, April 4 and 6, the Lightning have righted the ship somewhat and earned points in four of the past five contests (3-1-1). But they can’t get caught looking ahead to a crucial home matchup with the Toronto Maple Leafs on Thursday.

Sitting third in the Atlantic Division, Tampa Bay trails the second-place Maple Leafs by six points, meaning if the playoffs started under that scenario the Lightning would be forced to win at least once in Toronto, which would have home-ice advantage in a first-round matchup, in their quest for a third straight Cup.

In a physical contest Saturday against Winnipeg, the Lightning roared back from a two-goal deficit midway through the game to beat the Jets 7-4 in a match that featured a pair of fights and plenty of aggression.

“Those (scrums) probably helped,” said coach Jon Cooper, whose squad is 24-7-6 on its home ice. “I think we needed something to pull us into the fight. You’re down 4-2, and some of the rough stuff, I thought, pulled us into the fight a bit. Then we took advantage of a tired team in the last half of the game.”

Cooper said his team is better when the play gets chippy, though it occasionally has to dig deep.

“At times, especially in an 82-game season, we’ve got to pull (the fire) out of ourselves. Sometimes the coaches have to do it, sometimes the leaders do it and sometimes a little pugilism does it,” the 10th-year Lightning coach said.

The Red Wings have dropped two straight contests and four of their past five (1-3-1), with only Alex Nedeljkovic’s spectacular 46-save shutout in a 3-0 road win over the Carolina Hurricanes producing two points.

However, Detroit then was outscored 10-1 by two of the top four teams in the East — the conference-leading Florida Panthers and the New York Rangers, co-leader in points in the Metropolitan Division.

Sunday’s matchup against the Panthers was competitive for all of a scoreless first period before the visitors scored twice in 90 seconds then two more times in a 28-second span for a commanding lead after 40 minutes.

In the third, Pius Suter put Detroit on the board with his 14th tally to prevent a shutout by Spencer Knight, but Florida netted another pair to pad its conference lead with a 6-1 victory, the team’s 10th consecutive win.

“Against this team you either have to be perfect or you have to score and we weren’t perfect and we didn’t score, so then you’re down 4-0,” Detroit coach Jeff Blashill said.