Lighting face chance to even conference final vs. Rangers 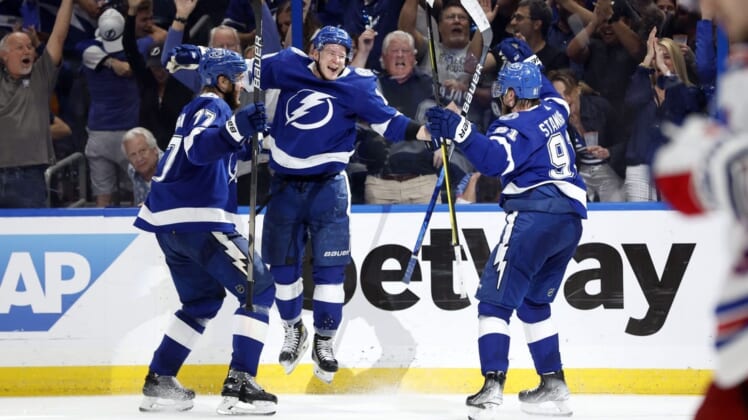 The Tampa Bay Lightning didn’t face many deficits in their march to the past two Stanley Cup titles.

This time around, though, they are up against some stiffer obstacles but still are showing they have an ability to come back as well.

The Lightning will try to even the series against the visiting New York Rangers in Game 4 of their Eastern Conference final Tuesday night.

Tampa Bay lost the first two games of the series in New York to fall in a 2-0 hole for the first time in its past three playoff runs.

The Rangers grabbed a 2-0 lead in Game 3 before the Lightning rallied to tie the score in the opening minutes of the third period, and Ondrej Palat scored the game-winner with 42 seconds left in regulation for a 3-2 victory.

“We had to stop the Rangers’ roll,” Tampa Bay coach Jon Cooper said. “Hopefully, that goal with (42) seconds left put a little pin in their bubble.”

The only time the Lightning have trailed heading into Game 4 of a series the past three postseasons was in the opening round this year against the Toronto Maple Leafs, when they faced a 2-1 series deficit before pulling off wins in Games 4, 6 and 7 to advance.

“Give them credit. They pushed us hard (in Game 3) and it was a desperate game for them,” Gallant said. “They were the better team overall. It went right down to the wire, and we had a chance to win late in the hockey game. It’s disappointing, but we’ll move on and get ready for the next one.”

The series has become increasingly more physical around the crease.

The Lightning were called for two penalties against Rangers goalie Igor Shesterkin in the second period of Game 3, leading to power-play goals by New York each time.

Gallant said he planned to speak with the NHL’s goaltending supervisor regarding the rough play around the net.

“I don’t like it,” Gallant said. “Hopefully, when we talk to the supervisor (on Monday), they’ll take care of some of that because it wasn’t right.”

Cooper said his team isn’t looking to commit penalties on the opposing goalie.

“Is part of this game being net-front? Yes. Is that in our game plan to knock people over? No,” Cooper said. “Trust me, we’re not trying to hit the goalie. I think we were more angry about it than the Rangers were.”

The Lightning will continue to be without center Brayden Point, who was second on the team with 28 goals in 66 games during the regular season.

Point injured his leg in Game 7 against the Maple Leafs. He has been skating with the team recently but will miss his eighth straight game.

Gallant said on Monday that he expects center Ryan Strome to play after leaving Game 3 with a lower-body injury. Strome was fourth on the team with 21 goals during the regular season.

Another Rangers center, Barclay Goodrow, hobbled off the ice late in Game 3 after blocking a shot, but he returned and should be ready for Game 4.