Light-hitting Orioles look to break through against high-flying Twins 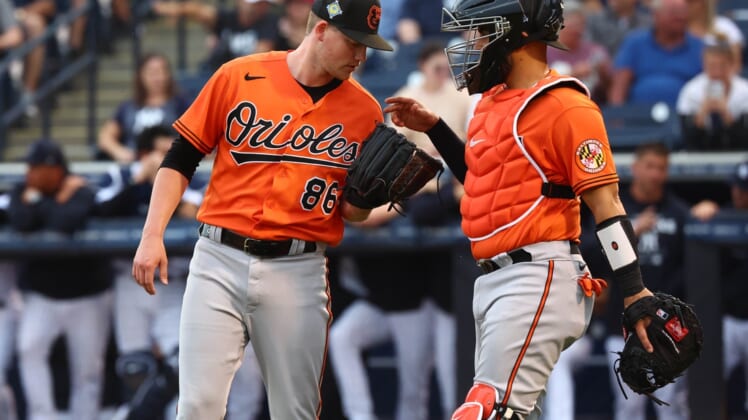 Dylan Bundy once was a member of the Baltimore Orioles.

When he departed from that organization, it was part of a trade for four minor-league pitchers.

One of those was Kyle Bradish.

The story will come full circle Wednesday night when Bundy heads to the mound as the starting pitcher for the Minnesota Twins vs. the host Orioles.

Bradish will start for the Orioles in a matchup of right-handers.

That December 2019 trade sent Bundy to the Los Angeles Angels, though he has since changed teams again.

Bundy (3-1, 2.95 ERA) is coming off his first loss of the season after giving up six runs in six innings in a 6-1 loss to the Tampa Bay Rays last Friday.

While the scheduled starters create a good storyline, Minnesota has had plenty of good work up and down the pitching staff.

Twins relievers haven’t allowed a run in a combined eight innings in the first two games of the series — both Minnesota victories. The Orioles have one hit off Minnesota relievers.

“I see a collectively strong group of guys who are ready to pitch anytime,” Twins manager Rocco Baldelli said of the bullpen. “It’s easier said than done to be mentally focused and relaxed at the same time.”

Baltimore’s offensive struggles haven’t faded, with the team scoring more than two runs in just two of its past seven games. The Orioles are 1-for-9 with runners in scoring position across the first two games of the series.

“We have to make a little bit more contact,” Orioles manager Brandon Hyde said. “We’re not having the best of luck. We’re just not taking good enough at-bats to win games against good pitching staffs.”

The Orioles are hitting .215 as a team. The shortcomings on offense have become so obvious that pitchers have been quizzed about whether it puts extra pressure on them.

“The pitchers aren’t worried about that at all,” said Bruce Zimmermann, who was Baltimore’s starter Tuesday night.

There are other issues to address as well. Orioles third baseman Tyler Nevin left in the sixth inning of Tuesday night’s game with a groin ailment.

“As I was out there, it was grabbing on me and it was getting a little sore,” Nevin said.

Hyde said he’s hopeful that Nevin will arrive at the stadium feeling better Wednesday, otherwise there might be just three reserves available unless there’s a roster move.

“We’re going to have to do something,” Hyde said.

He played as the third baseman Monday and was used as the first baseman Tuesday night. That’s versatility that could benefit the Twins, who’ve won 11 of their past 12 games.

“I’ll play either one, wherever they want me,” Miranda said. “I just want to be in the lineup.”