Liberty storm back for win over Fever 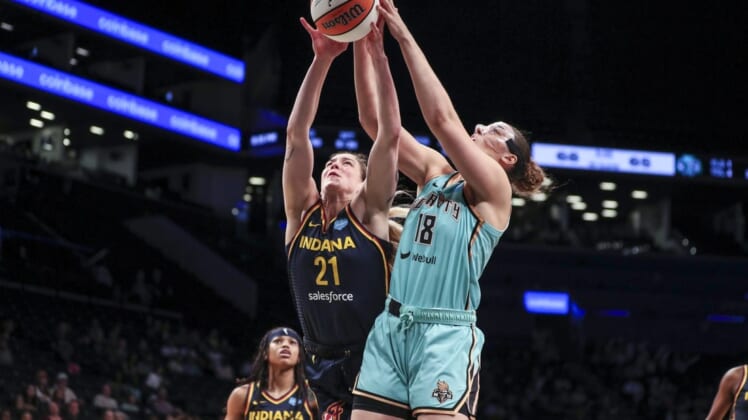 Natasha Howard scored 25 points and grabbed 10 rebounds Friday night as the New York Liberty exploded for 59 second half points for a come-from-behind 97-83 win over the Indiana Fever in Indianapolis.

Han Xu came off the bench to add 16 for New York (5-8), which won for the fourth time in five games. Sabrina Ionescu stuffed the stat sheet with 13 points, seven assists and six rebounds. The Liberty earned a 43-27 advantage in bench scoring.

Trailing by five at halftime, New York took control by scoring a whopping 34 points in the third quarter to establish a 72-63 advantage. The Liberty scored on their first seven possessions of the period to grab a 54-50 lead on Stefanie Dolson’s baseline jumper at the 6:17 mark and never looked back.

After controlling the first half, the Fever couldn’t get a stop in the second half and couldn’t generate enough offense. The lead was in double figures for the last 6:52, reaching as high as 17 points on Howard’s layup with 4:43 left that made it 88-71.

New York canned 58.5 percent of its field goals, including 13 of 28 3-point attempts, and drew assists on 31 of its 38 made buckets. Most importantly, the Liberty cut their turnovers down from eight in the first half to four in the second.

Indiana carved out a 43-38 edge at the break on the strength of offensive rebounding, foul shooting and taking care of the ball. The Fever grabbed seven offensive boards while allowing just one, outscored New York 9-4 at the foul line and committed just one turnover.

But Indiana’s subpar shooting eventually caught up with it. For the game, the Fever hit just 31 of 75 tries from the field, including only 4 of 14 on 3-pointers.