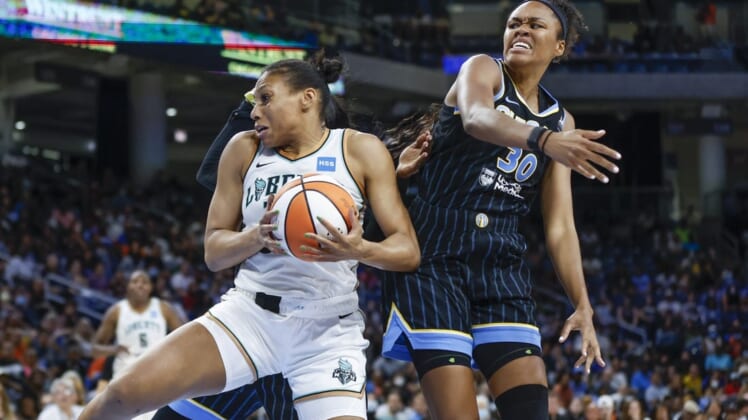 The New York Liberty dealt an immediate and surprising blow to the Chicago Sky’s chances of repeating as WNBA champions.

Now, the second-seeded Sky must avoid making a shockingly early exit from the playoffs, while trying to even their best-of-three series with the visiting seventh-seeded Liberty in Game 2 on Saturday afternoon.

It was the Liberty’s first playoff win since 2015 — also the most recent year they won a postseason series — and gives them home-court advantage with a decisive Game 3 on Tuesday in Brooklyn, if needed.

Liberty stars Sabrina Ionescu and Natasha Howard each scored 22 points and New York shot 44 percent (11 of 25) from 3-point range and made 13 of 14 free throws.

“We really just stayed committed to the process,” Ionescu said. “It’s important that we won a game for this organization, for New York, but there’s a lot of games left in us. So, we’re gonna have to do it again”

Meanwhile, the Sky, who allowed an average of 81.3 points during the regular season, yielded their most playoff points since 2016. They also shot 28 percent from beyond the arc (7 of 25) and missed six free throws.

Chicago, looking to become the first repeat WNBA champions since the Los Angeles Sparks in 2001 and 2002, missed eight straight shots down the stretch.

Chicago won a franchise-record 26 games this season, but split its final six. The only time the Sky dropped back-to-back contests in 2022 came during the final week of the regular season.

“We have to stay together,” said Sky star Candace Parker, who had 17 points and 10 rebounds Wednesday. “We know that we made it tough. … We’ve got to come out on Saturday and, overall, be better.”

Kahleah Copper, Chicago’s leading scorer during the regular season at 15.7 points per game, scored 21 in Game 1. The WNBA Finals MVP last season, Copper has averaged 19.0 in her past seven playoff contests.