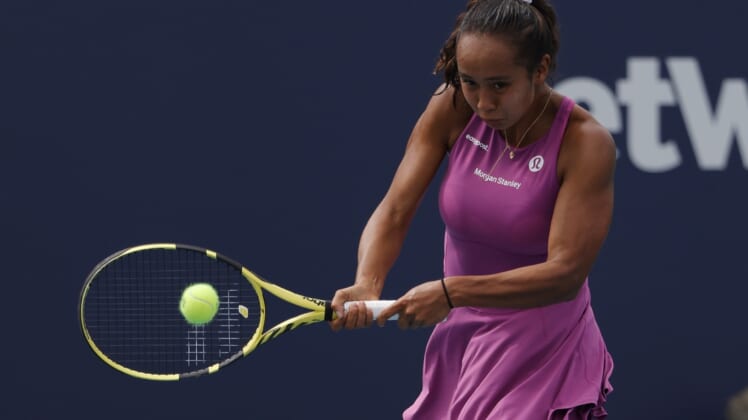 Canada’s Leylah Fernandez recovered from losing seven straight games Monday to win 1-6, 6-2, 6-2 over No. 14 seed Anastasia Pavlyuchenkova in the first round of the Internazionali BNL d’Italia in Rome.

The 19-year-old Fernandez won the opening game and dropped the next seven before rallying to win 12 of the last 15 games, putting away her Russian opponent in one hour and 54 minutes.

“She’s an incredible player and she’s very comfortable on clay. I knew it was going to be tough,” Fernandez said. “The first set, I made a few mistakes and she just took advantage of it. In the second set, I just wanted to play a little more freely, just letting go of my arms.”

Fernandez took advantage of five double faults by Pavlyuchenkova and converted five of her 10 break chances.

“Even though I lost the first game (of the second set), I think it helped me to get into the match,” Fernandez said. “Afterwards, my balls were just going in. I’m just glad that I was able to keep attacking, keep being on the offensive, even though I was making mistakes, and I still kept trusting myself.”

Pavlyuchenkova, a 2021 French Open finalist, was playing just her second match since the Australian Open as she comes back from a knee injury.

Fernandez’s second-round opponent will be another Russian, Daria Kasatkina. Kasatkina moved on with a 6-4, 6-3 victory against Slovenia’s Tamara Zidansek.

Three seeded players were victorious Monday. No. 12 Belinda Bencic of Switzerland defeated Italy’s Elisabetta Cocciaretto 6-4, 6-2. No. 15 Coco Gauff was a 6-1, 6-4 winner over Angelique Kerber of Germany. No. 16 Victoria Azarenka of Belarus won 6-3, 6-0 against Viktorija Golubic of Switzerland.

Bencic trailed 4-3 in the first set before turning things around on the tough Italian clay.

“For me, it’s tough conditions in Rome. There is a lot of clay on the courts,” Bencic said. “I have to find my way into the matches and I feel like I can’t play my usual game here. I have to take a Plan B, or a Plan C even, so I’m happy I found a way today.”