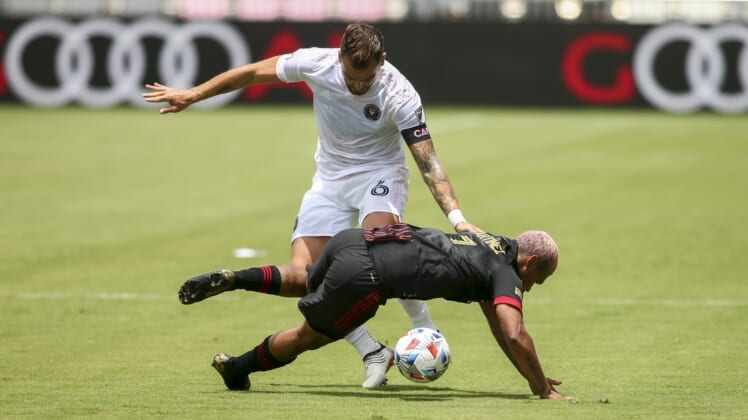 Inter Miami would not find the mark until Morgan’s spectacular individual effort resulted in his first goal since Oct. 10, 2020.

Morgan took a long ball from Gregore on an advance up the field, maneuvered his way through two Atlanta defenders and fired a perfect left-footed strike past goalkeeper Brad Guzan.

Miami midfielder Victor Ulloa nearly put his team in front just as stoppage time began when he got in close and fired a shot that Guzan deflected. Ulloa then tripped over Guzan who came out to try and recover the rebound, but no foul was called in the box.

Miami, which continues to prove itself a competitive foe early in its second MLS season, argued multiple non-calls inside the 18-yard box during the match to no avail.

Martinez scored his first goal since returning from a torn ACL that sidelined him since the first match of 2020. Martinez played 73 minutes before being substituted.

On the score, Martinez gained possession just at the edge of the 18-yard box off a feed from Emerson Hyndman, turned quickly and left-footed a shot past Miami keeper John McCarthy.

It was Atlanta’s second goal in MLS play since scoring three in its home opener on April 24 against Chicago.

Morgan nearly helped even the score much earlier in the 18th minute when his cross went through to the legs of Atlanta defender Miles Robinson to a wide open Gonzalo Higuain in front of the Five Stripes’ goal. But Guzan bailed out his team with a kick save.

Inter Miami midfielder Blaise Matuidi left the game in the 14th minute after taking a hit earlier from Atlanta midfielder Santiago Sosa when they two collided as Sosa came running full speed to challenge for the ball.