LeSean McCoy rips Eric Bieniemy, “They know the type of coach he really is” 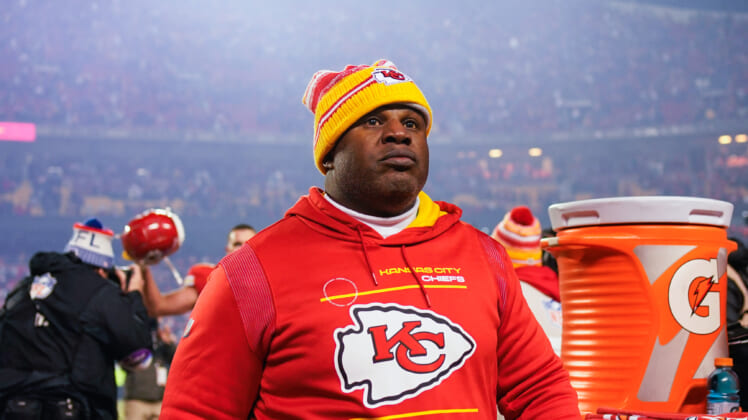 But with every coaching opportunity that passes, we can’t help but wonder why Bieniemy doesn’t get hired to be a head coach. Well, former Chiefs running back LeSean McCoy says he knows why Bieniemy hasn’t been hired yet, and as someone who played for the coach, his insight might pique the interest of many.

Bieniemy has interviewed for several vacant head coach positions in his day, but for whatever reason, despite leading a top-scoring offense, he’s never been hired. Sure, he doesn’t actually call the plays, but that’s no longer perceived to be the roadblock it once was.

We’ve seen several head coaches get hired who have no previous play-calling experience, Bieniemy at least has some, even if he’s not the top dog calling plays in the Andy Reid-Patrick Mahomes offense.

Yet, one of his former players, LeSean McCoy, who only was coached by Bieniemy for 14 games during the 2019 season feels he understands why Bieniemy doesn’t receive more respect around the league.

While McCoy is now retired as of the start of the 2021 football season, he sees Bieniemy as the main reason why he initially left the Chiefs.

Appearing on the ‘I Am Athlete Tonight’ show on Mad Dog Sports Radio, McCoy didn’t hold back on his thoughts on why Bieniemy has yet to be promoted to head coach in the NFL.

“There’s a reason why every year they hype him up to get a job and then when the time comes nobody hires him because they know the type of coach he really is.”

LeSean McCoy speaking about Eric Bieniemy on I Am Athlete Tonight

Unfortunately, McCoy didn’t really get into the ‘guts’ of why Bieniemy has been overlooked, as can be heard on the podcast, they were running out of time. Perhaps this won’t be the last we hear from McCoy on why Bieniemy continues to come up short in the interview process, I think we’re all curious to hear more at this point.

It didn’t take long for current head coach of the Chiefs to hear about McCoy’s comments. Andy Reid quickly responded, throwing support behind Bieniemy, a coach he’s worked with for the past nine seasons.

For what it’s worth, as coach Reid alluded to, McCoy was 31 years old in 2019 when he suited up for the Chiefs. Counting postseason play, McCoy only played a total of 12 more games in his career when he was a member of the Super Bowl-winning Tampa Bay Buccaneers before retiring the next year in 2021.

While McCoy wants to put some of the blame on Bieniemy for his playing days wrapping up when they did, it doesn’t appear he received strong interest elsewhere, or saw the field much in his time with the Bucs, as McCoy received just 25 more touches in his career after separating from the Chiefs.

Still, I want to hear more about his feelings about Bieniemy.