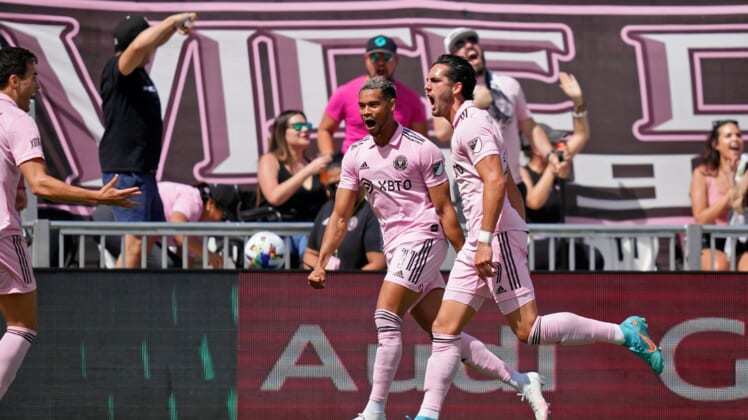 Leonardo Campana delivered the first hat trick in Inter Miami CF history, including his third goal in the 88th minute, for a 3-2 victory over the New England Revolution at Fort Lauderdale, Fla.

Miami wound up with its first win of the season just when it seemed as if both teams were headed for a mutually disappointing draw.

Campana had big shoes to fill, with the team’s top scoring threat, Gonzalo Higuain, not able to play due to injury.

Campana’s first two goals rallied Inter Miami from a one-goal deficit into a 2-1 lead 23 minutes into the game. A a second-half penalty kick from New England’s Carles Gil tied the score 2-all.

A 65th-minute foul in the box against Miami’s Damion Lowe, on New England’s Justin Rennicks on a physical challenge in which Lowe got some of the ball but was forceful in bowling over Rennicks, earned the Revolution a penalty. Gil converted in the 67th minute.

Rennicks opened the scoring for New England. He got behind the Miami defense and put in a cross with a volley from in close.

But Miami (1-4-1, 4 points) found the resolve to come back, with Campana scoring twice in a span of about six minutes before halftime. The first one was on a header, and the second off a cross to the other side of the box for a clear shot.

Campana’s third goal came when he got a foot on a saved shot from teammate Bryce Duke by New England goalkeeper Brad Knighton. The ball rolled slowly over the goal line and Miami only had to hang on for a few minutes of stoppage time for the win.

The Revolution (1-4-1, 4 points) lost for the fourth straight time in MLS play and fifth across all competitions.

Miami had scored three goals total over five matches before equaling that total in one game on Saturday.