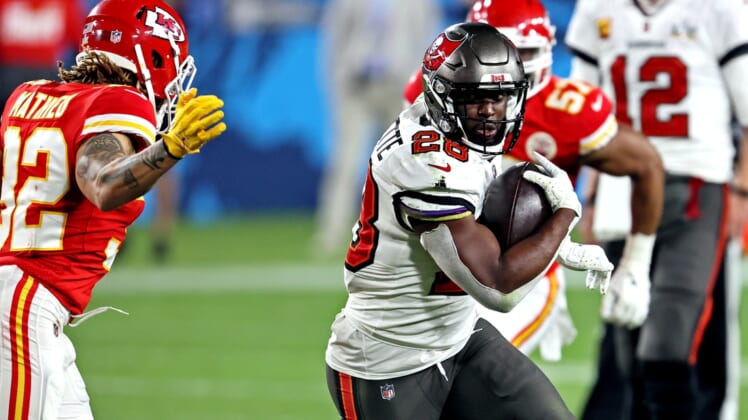 Running back Leonard Fournette said money wasn’t the only significant factor in his decision to re-sign with the Tampa Bay Buccaneers on Wednesday.

The Buccaneers did not divulge the terms of the contract for Fournette, however multiple media outlets previously reported that it was a one-year deal worth $3.25 million. Incentives could push that total to $4 million, per reports.

“It was a difficult process. I knew what I deserved,” Fournette said Wednesday. “I believed in myself, and I just wanted to come back and enjoy myself. Instead of me coming and being the new face on the block, I came back to the team that I enjoyed my process with. I think me coming to this team kind of humbled me a lot, being around so much talent, and you’re so used to being that guy on the team. I think it just helped develop me as a better man, too.

“I could’ve went somewhere and got more money, but I think this is just the place right now.”

Fournette, 26, totaled four touchdowns in four postseason games, including one in Tampa Bay’s 31-9 win over the Kansas City Chiefs in Super Bowl LV. He had a franchise-best 448 scrimmage yards in the playoffs and led the team in rushing yards (300), rushing touchdowns (three), scrimmage touchdowns (four) and receptions (18).

“Leonard’s playoff performance was nothing short of spectacular and was the fruition of him really buying into what we were trying to accomplish as a team last year,” general manager Jason Licht said. “Lenny’s versatility and toughness make him a very dynamic player in our offense and bringing him back adds another valuable asset at the running back position to help in our pursuit of another championship.”

Fournette signed a one-year, $2 million deal with the Buccaneers on Sept. 2, 2020, just days after he was waived by the Jacksonville Jaguars.

He had a career-worst regular season in 2020, finishing with just 600 yards from scrimmage and six touchdowns in 13 games before his sterling playoff run.

“It made perfect sense to come back,” Fournette said. “Despite whatever the money was, I feel great. I’m happy to be back. They’re happy I’m back. I love this organization, I love the players, the coaches, and we’re just trying to run it back.”