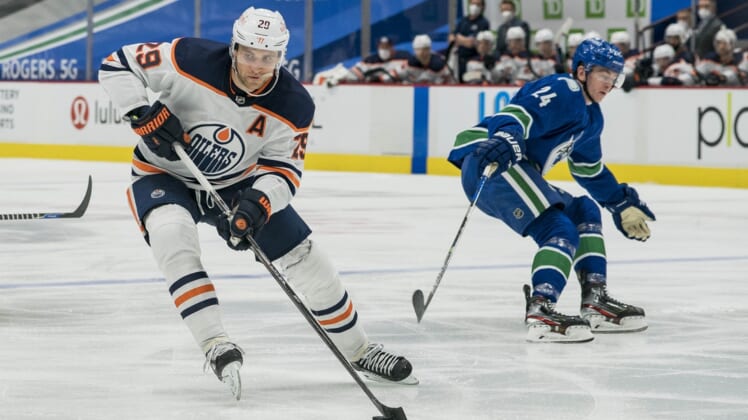 Leon Draisaitl scored twice and Connor McDavid notched another two points in his chase for 100 on the season to lead the visiting Edmonton Oilers to a 4-1 victory over the slumping Vancouver Canucks on Tuesday night.

McDavid, who is running away with the scoring title, collected two assists to give him 93 points; he has five games to reach the century mark.

Evan Bouchard and Darnell Nurse also scored while goaltender Mike Smith made 28 saves for the Oilers (32-17-2, 66 points), who are six points behind the North Division-leading Toronto Maple Leafs with five games remaining. Toronto has four games to play.

Brock Boeser scored for the Canucks (19-25-3, 41 points), who have lost six straight games and are on the verge of being eliminated from the playoffs. Thatcher Demko stopped 23 shots.

The Oilers and Canucks will now play a pair of games in Edmonton. The Oilers have won five of seven meetings this season.

After falling behind on Boeser’s first-minute goal, the Oilers scored three times late in a dominant second period en route to their fifth win in six outings.

Draisaitl evened the count when McDavid intercepted J.T. Miller’s pass and fed a pass to the slot. Draisaitl buried a quick short-side shot at 14:29 of the frame.

Draisaitl netted the winning goal three minutes later during a four-on-three power play. He and McDavid completed a give-and-go that ended with Draisaitl’s one-timer, his 26th goal of the season.

McDavid has 29 multi-point games in 51 outings while Draisaitl is second in the league scoring race with 75 points.

Bouchard, playing his first NHL game since March 1, made it a 3-1 count with another power-play goal when his point shot found the mark with 46.6 seconds left in the second period.

Nurse converted a two-on-one rush with Josh Archibald with five minutes remaining to net his 16th goal and round out the scoring.

The Canucks took the lead on the game’s first shot on goal. Boeser collected his 19th goal of the season 34 seconds into the affair when Nils Hoglander’s cross-ice pass ricocheted off a defender and banked into the net off Boeser’s foot.

The goal was Boeser’s 200th NHL point in his 244th career game, making him the fourth-fastest player in franchise history to reach 200 points from the start of his career.