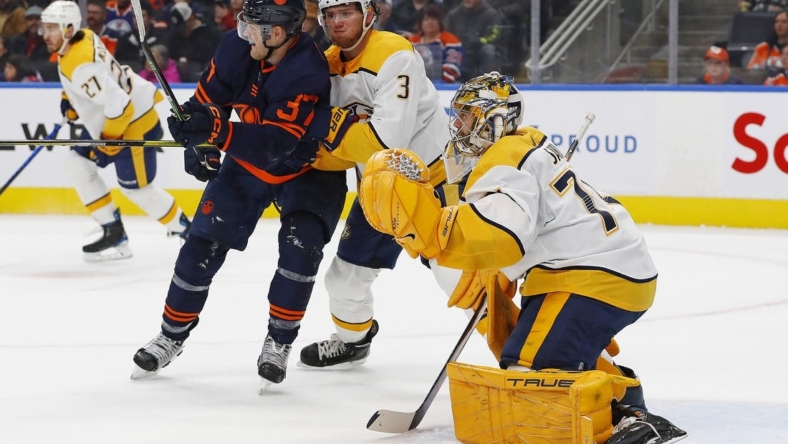 Leon Draisaitl had a goal and four assists to help the host Edmonton Oilers to a fifth straight win, 7-4 against the Nashville Predators on Tuesday.

Connor McDavid had two goals and two assists, Evander Kane had a hat trick and Jack Campbell made 19 saves for the Oilers.

Filip Forsberg had a goal and two assists, Mikael Granlund had three assists and Matt Duchene had two assists for the Predators, who are 1-6-1 in their past eight games. Juuse Saros made 30 saves.

Mattias Ekholm gave Nashville a 1-0 lead 34 seconds into the first period. Duchene’s pass attempt hit the skate of Oilers defenseman Cody Ceci and redirected to the front of the net. Campbell made the save but Ekholm was there to tap in the rebound.

Duchene’s assist was the 400th of his NHL career.

Kane tied it 1-1 at 4:14. Draisaitl drove down the right wing before dishing a cross-ice backhand feed from the half wall to Kane, who cut to the net before sweeping a backhand by Saros.

They connected again to put Edmonton ahead 2-1 at 7:25, with Draisaitl sending a one-touch pass from the corner to Kane in the slot.

McDavid struck from the right circle 26 seconds later to push it to 3-1, becoming the first player this season to reach double-digit goals.

That prompted Predators coach John Hynes to call a timeout.

McDavid put one home in the top corner of the short side from the inner left circle on the power play to make it 5-1 at 7:26 of the second period.

Nashville got one back on the power play at 9:28 when Johansen redirected Roman Josi’s shot in the slot to narrow it to 5-2.

Forsberg cut it to 5-3 on a one-timer from the left circle at 4:51 of the third period.

Nino Niederreiter converted on the power play to tighten it to 6-4 at 17:10.

Kane scored into an empty net at 18:23 to complete the hat trick and seal the 7-4 final.