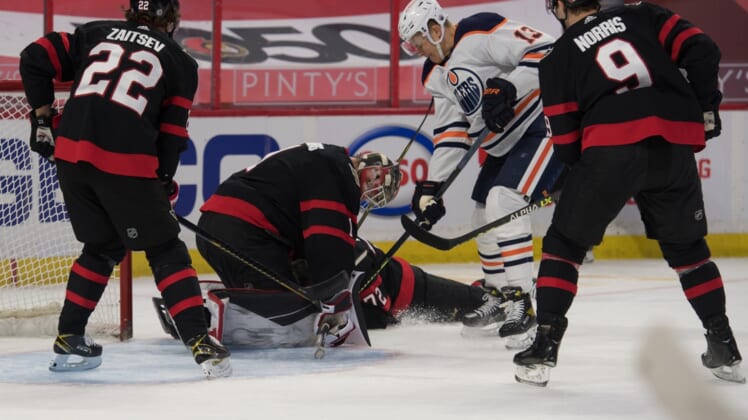 Leon Draisaitl collected a hat trick in a four-point game, while Connor McDavid scored one goal — the third-period game-winning tally — and added three assists to lead the visiting Edmonton Oilers a 4-2 victory over the Ottawa Senators on Wednesday.

Goaltender Mikko Koskinen made 28 saves, the biggest in the final minute against Tim Stutzle while it was a one-goal game, for the Oilers to tie a franchise record with eight consecutive wins over the Senators this season.

Josh Norris and Connor Brown scored for the Senators. Goaltender Marcus Hogberg, playing his first game since Feb. 18, stopped 31 of 34 shots in the loss.

The clubs meet for the last time this season on Thursday in Ottawa when the Oilers will look to complete a nine-game sweep of the last-place Senators.

McDavid, who has racked up five goals and 20 points this season against Ottawa, netted the game winner with 6:06 remaining in the clash. He took a pass from Draisaitl, went around a defender before driving to the net and lifted a wrist shot home.

Draisaitl added an empty netter in the final second to give him 21 points this season against Ottawa. The last Oilers player to collect 20 points in a season against one opponent is Wayne Gretzky, who did it against both the Los Angeles Kings and Vancouver Canucks in 1986-87.

Draisaitl’s power-play goal midway through the first period opened the scoring. McDavid sent a pass from the left face-off dot to Draisaitl at the right dot, and he buried a one-timer to reach the 20-goal mark. The Oilers are the league’s lone team with two players that have scored 20 or more goals so far this season in Draisaitl and McDavid, who now has 23 tallies. In fact, only three teams have a single 20-goal scorer.

After Josh Norris scored for the Senators 25 seconds into the second period, Draisaitl’s second of the game came with another one-timer — this time the puck from his release point was just ahead of the goal line near the corner — late in the second period.

Brown scored for the fifth consecutive game 62 seconds into the third period to again pull the Senators even, but that set the stage for McDavid’s heroics that give him 68 points through 40 games.