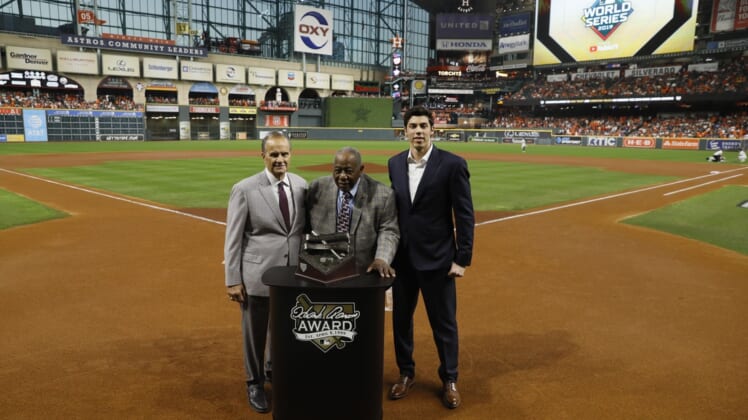 “Hank Aaron is near the top of everyone’s list of all-time great players,” Major League Baseball commissioner Rob Manfred said in a statement. “His monumental achievements as a player were surpassed only by his dignity and integrity as a person. Hank symbolized the very best of our game, and his all-around excellence provided Americans and fans across the world with an example to which to aspire. His career demonstrates that a person who goes to work with humility every day can hammer his way into history — and find a way to shine like no other.”

Aaron had worked in the Atlanta Braves’ front office since retiring from his playing career in 1976. He most recently was a senior vice president, a role he held since December 1989. The team said he died in his sleep.

“We are absolutely devastated by the passing of our beloved Hank,” a statement from Braves chairman Terry McGuirk began. “He was a beacon for our organization first as a player, then with player development, and always with our community efforts. His incredible talent and resolve helped him achieve the highest accomplishments, yet he never lost his humble nature. Henry Louis Aaron wasn’t just our icon, but one across Major League Baseball and around the world. His success on the diamond was matched only by his business accomplishments off the field and capped by his extraordinary philanthropic efforts.

“We are heartbroken and thinking of his wife Billye and their children Gaile, Hank Jr., Lary, Dorinda and Ceci and his grandchildren.”

The longtime Milwaukee/Atlanta Braves slugger held the record for most career home runs for more than three decades before Barry Bonds broke it in 2007. Aaron finished his 23-year career with 755 home runs, including a 19-year stretch in which he hit at least 24 every season.

“Hammerin’ Hank” began his career in the Negro Leagues in 1951 with the Indianapolis Clowns, before the Braves picked up his contract. He made his MLB debut in 1954 and spent the next 21 seasons with the Braves before ending his career with the Milwaukee Brewers (1975-76).

Aaron was in the news two weeks ago when he publicly received the first dose of Moderna’s COVID-19 vaccine with his wife Billye, with the aim of easing doubts about the vaccine.

“I feel quite proud of myself for doing something like this,” said Aaron at the time. “It’s just a small thing that can help zillions of people in this country.”

Aaron was elected to the Hall of Fame on his first ballot in 1982. Both the Braves and Brewers retired his No. 44.

“Hank Aaron’s incredible talent on the baseball field was only matched by his dignity and character, which shone brightly, not only here in Cooperstown, but with every step he took,” said Hall of Fame chairperson Jane Forbes Clark in a release.

“His courage while pursuing the game’s all-time home run record served as an example for millions of people inside and outside of the sports world, who were also aspiring to achieve their greatest dreams. His generosity of spirit and legendary accomplishments will live in Cooperstown forever. On behalf of the Board of Directors and the entire staff of the Hall of Fame, we send our deepest sympathies to his wife, Billye, and his entire family.”

Since 1999 — the 25th anniversary of Aaron passing Ruth — the Hank Aaron Award has been presented annually by Major League Baseball to the top hitters in each league. Atlanta’s Freddie Freeman and Jose Abreu of the Chicago White Sox earned the prestigious honor in 2020.