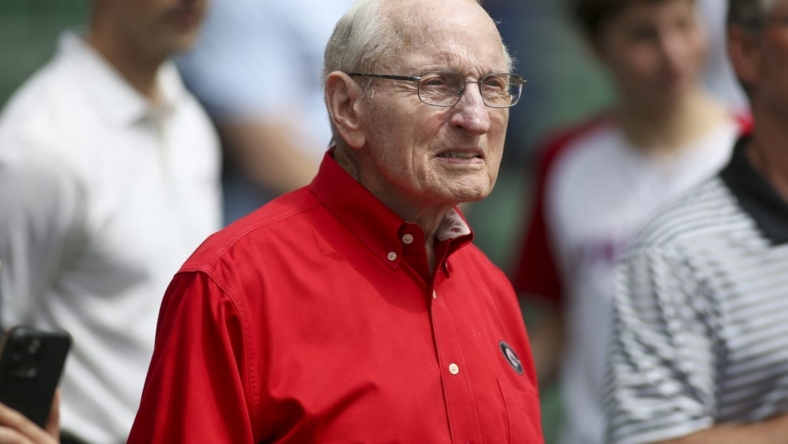 Dooley passed in his Athens, Ga., home alongside his wife, Barbara Dooley, and his four children.

According to the Atlanta Journal-Constitution, Dooley was briefly hospitalized on Oct. 8 with a mild case of COVID-19. He had been receiving hospice care over recent days, the report said.

“Our family is heartbroken by the death of Coach Dooley,” current Bulldogs coach Kirby Smart said in a statement. “He was one of a kind with an unmatched love for UGA! He and Barbara embraced my family from day one. He will be missed in our community, university, and in college athletics.”

Dooley, a member of the College Football Hall of Fame, was Georgia’s winningest coach with 201 wins and six Southeastern Conference titles. He coached Georgia to the 1980 national championship, a team led by legendary running back Herschel Walker.

“My heart breaks at Coach Dooley’s passing,” Walker said in a statement. “Coach Dooley was like a second father to me and his family became my family. Coach put his trust in me and I put my trust in him. He taught me about the values of hard work and perseverance. …

“Julie and I are praying for Barbara Dooley and the entire Dooley family during this difficult time.”

.@HerschelWalker's statement on the passing of Coach Vince Dooley. pic.twitter.com/czpKacpJzS

Dooley is also a member of the Alabama Sports Hall of Fame. The Mobile, Ala. native played quarterback at Auburn from 1951-53 before holding an assistant coaching role from 1956-63.

“We are heartbroken to hear of Coach Dooley’s passing. Georgia Athletics is what it is today because of Vince Dooley,” Georgia athletic director Josh Brooks said in a news release. “He was a role model, mentor and friend. My thoughts and prayers are with Barbara and his entire family. Vince Dooley was one of the greatest coaches and athletic administrators of all time, and I am humbled and honored to serve in a role that he built. All of us at the University of Georgia will continue to honor his legacy for years to come.”

Dooley lived in the same home on Milledge Circle for 63 years. He and his wife raised two sons, Daniel and Derek, and two daughters, Deanna and Denise, in his small-town northeast Georgia home. Dooley, up until his death, was frequently seen around Athens. He could be found in his garden, or might be spotted in the athletics offices checking in on his Bulldogs or picking up an old game program.

“Sorry to hear the news of coach Dooley’s passing,” said Mark Richt, Georgia’s coach from 2001-15. “Obviously one of the greatest coaches of all time. But also the man who hired me and mentored me in my first head coaching opportunity at Georgia. I owe a lot to Coach. May God bless Barbara and the rest of the Dooley family!”

Dooley died one day before the Bulldogs play fierce rival Florida at Jacksonville.