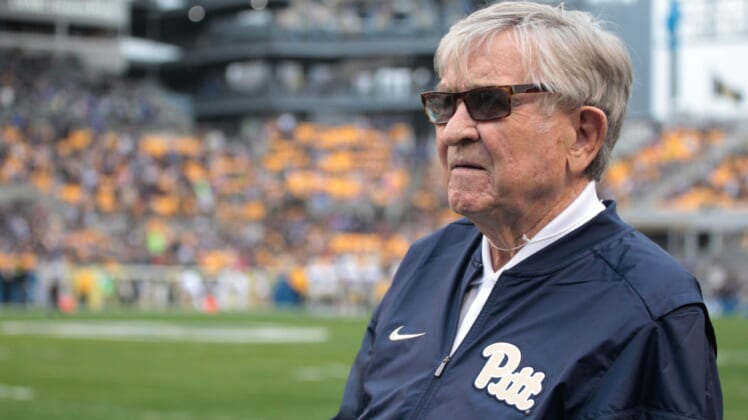 Johnny Majors, a legendary college football coach for the Tennessee Volunteers and Pittsburgh Panthers, passed away on Wednesday at the age of 85.

Majors, a member of the College Football Hall of Fame, achieved iconic status at the University of Tennessee both during his days as a player and coach.

He grew up in Tennessee and was surrounded by football from the beginning, playing for his father Shirley in high school. Johnny Majors earned SEC MVP honors from 1955-’56 and finished as a runner-up for the Heisman Trophy. Majors finished second behind Notre Dame’ Paul Hornung, falling just 72 points shy of the fellow legend.

Majors enjoyed tremendous success on the field at Tennessee with incredible stats for the time. In his final season, he recorded seven touchdowns and was one of the best running backs in college football.

Majors would then take over at Pittsburgh. Following a 6-5-1 season in 1973, the Panthers would win 15 games over the next two seasons. In 1976, Pittsburgh went undefeated and was named the national champions.

He would take over at Tennessee the following season. Across 15 seasons with the Volunteers, Majors posted a 116-62-8 record with seven bowl wins and three SEC titles. He also won the SEC Coach of the Year award in 1985.

Majors, who finished with a 185-137-10 record as a head coach, returned to Pittsburgh in 1993 and spent four more seasons on the sidelines.

We extend our condolences to Majors’ family and friends during this difficult time.