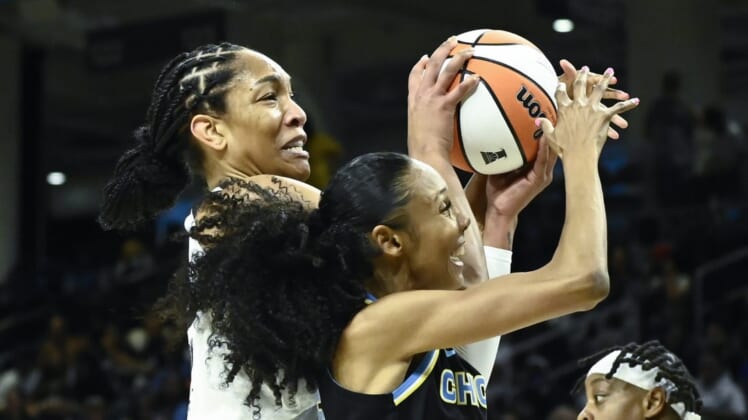 Kelsey Plum scored a game-high 24 points Tuesday night while A’ja Wilson controlled the paint as the Las Vegas Aces won the second WNBA Commissioner’s Cup with a wire-to-wire 93-83 win over the Chicago Sky in Chicago.

Wilson finished with 17 points, 17 rebounds and six blocked shots, enabling Las Vegas to earn the majority of the half-million dollars on the line. Each Aces player earned a $30,000 check for the win.

Las Vegas also got 19 points and five assists from Chelsea Gray, plus 18 points from Jackie Young. The Aces sank 50 percent of their field goal attempts and were 9 of 21 on 3-pointers. Gray earned Most Valuable Player honors, enabling her to pocket an extra $5,000.

Candace Parker scored 20 points and grabbed 14 rebounds for the Sky, while Kahleah Copper and Emma Meesseman added 18 points each for the Sky. But Chicago struggled to make shots, converting just 40.5 percent from the field and going 6 of 30 on 3-pointers.

Sky players settled for the consolation prize of $10,000 checks. They were hoping to add this title to their WNBA crown of October, but couldn’t make up for their brutally slow start.

Las Vegas announced its presence with authority immediately. It forced a Chicago timeout after Plum buried a 3-pointer at the 8:05 mark of the first quarter for a 13-0 lead and extended that margin to 33-14 after 10 minutes.

The Aces cooled to an extent in the second period, although the lead stayed in double figures. They even took momentum into the half, creating a turnover after Chicago had a chance to draw within 10 to end the half. Instead, Young put back Plum’s miss as time expired for a 48-34 halftime cushion.

The Sky made a move during the third quarter, pulling within seven points when Rebekah Gardner put back Meesseman’s 3-point miss. However, Plum had the answer, canning a top of the key 3-pointer with 3.6 seconds left to give Las Vegas a 70-60 lead going to the fourth period.