LeBron staying ‘even keel’ as Lakers look to bounce back 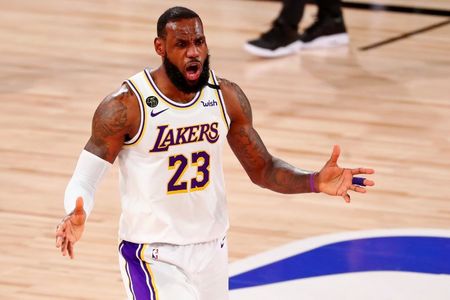 (Reuters) – LeBron James on Monday said he isn’t letting the highs and lows of the NBA Finals get the better of him, preferring to focus on fixing the mistakes that led his Los Angeles Lakers to fall 115-104 to the Miami Heat on Sunday.

The Lakers enjoy a 2-1 advantage in the best-of-seven series but the team had an off night in Game Three, committing 20 turnovers and suffering too many defensive breakdowns against a short-handed Heat squad.

A frustrated James left the court with 10 seconds left to play in Sunday’s game but the veteran forward vowed that the team will be better on Tuesday.

“Obviously, no one wants to ever lose. You hate that feeling, especially when you know you didn’t play your best, and I definitely wasn’t at my best last night from an individual standpoint.

“So I take that responsibility and I take that with a lot of passion and understanding of how I can be much better in the following game.

James, 35, is two wins away from his fourth championship and said his experience has helped him appreciate the importance of managing his emotions.

“Throughout the postseason, I stay even keel,” he said.

“As I’ve grown in this game and I’ve grown over the years, I kind of stay even keel, understanding that there’s always another opportunity to get better.

“We have that opportunity today and also tomorrow night in the game.”

This year’s NBA Finals will cap a season unlike any other as play restarted in July after a four-month hiatus with all games held at Disney World in Florida to limit the risk from the novel coronavirus.