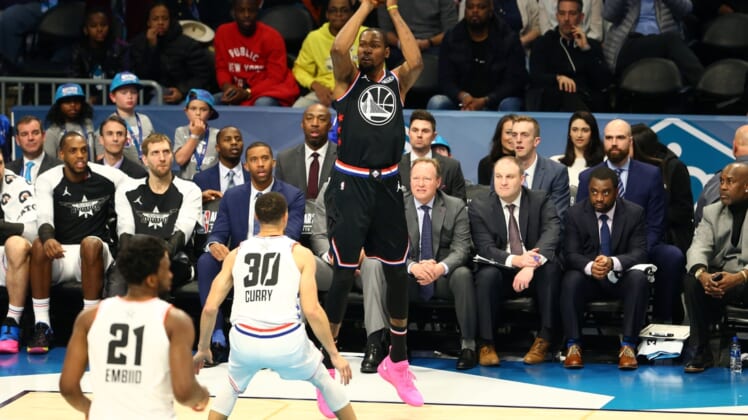 LeBron James will start in the All-Star Game for the 17th consecutive time when this season’s contest is held March 7 in Atlanta, extending his own record.

The Los Angeles Lakers forward also was named a captain for the All-Star Game. Forward Kevin Durant of the Brooklyn Nets is the other captain and will be making his 11th career appearance.

James and Durant will select their rosters on March 4.

The voting formula for starters consisted of fan balloting counting as 50 percent with player and media voting each counting as 25 percent.

Joining James as starters from the Western Conference are frontcourt players Nikola Jokic of the Denver Nuggets and Kawhi Leonard of the Los Angeles Clippers. The backcourt starters are Stephen Curry of the Golden State Warriors and Luka Doncic of the Dallas Mavericks.

NBA scoring leader Bradley Beal of the Washington Wizards and Kyrie Irving of the Brooklyn Nets are the starting guards from the Eastern Conference. Joining Durant in the frontcourt are Giannis Antetokounmpo of the Milwaukee Bucks and Joel Embiid of the Philadelphia 76ers.

Perhaps the biggest surprise was Portland Trail Blazers star Damian Lillard being bypassed as a starting guard. Lillard, who ranks third in the NBA with a 29.8 scoring average, tied with Doncic for a West starting spot.

Fan balloting was used as the tiebreaker. Doncic ranked second in the Western Conference backcourt voting by the fans and Lillard was third.

There has been criticism of the NBA holding an All-Star Game during the coronavirus pandemic, but commissioner Adam Silver defended staging the contest during an appearance on TNT.

“All-Star is the No. 1 fan engagement event of the entire season for the league,” Silver said. “It’s been a 70-year tradition and something like 100 million people will vote for All-Stars … For us, All-Stars is part of the league, no different than the games we played. It begins and ends with the fans. This is an event our fans love to see. Nothing comes without controversy during a pandemic.”

James trails only Kareem Abdul-Jabbar (19 times) and Kobe Bryant (18) in number of All-Star selections. He is averaging 25.7 points, 8.2 rebounds and 7.9 assists per game this season.

Durant is back in the contest after missing all of last season due to an Achilles injury. He is averaging 29.0 points, 7.3 rebounds and 5.3 assists. Irving (seventh) is averaging 28.3 points per game.

Beal is making his third appearance but is a starter for the first time. He is averaging 32.8 points per game.

“It is truly an honor to be selected to start in the All-Star Game for the first time in my career,” Beal said in a statement. “I want to thank the fans, media and players for selecting me to represent the Wizards organization during the All-Star festivities in Atlanta. I also want to thank my teammates, coaches, the entire organization, and our fans who are still supporting us through this unprecedented season.”

Antetokounmpo (fifth) is the two-time reigning regular-season MVP. He is averaging 28.2 points, 11.4 rebounds and 5.8 assists. Embiid (fourth) is fourth in the NBA in scoring (29.7) while also averaging 10.8 rebounds.

The All-Star Game reserves will be announced on Tuesday. Seven players from each conference will be chosen by NBA head coaches.