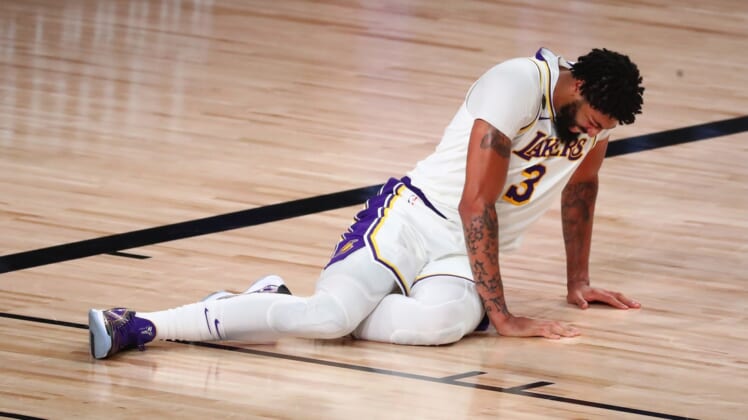 Sep 8, 2020; Lake Buena Vista, Florida, USA; Los Angeles Lakers forward Anthony Davis (3) lies on the floor after suffering an apparent injury with Houston Rockets forward Robert Covington (not picture) during the second half of game three in the second round of the 2020 NBA Playoffs at AdventHealth Arena. Mandatory Credit: Kim Klement-USA TODAY Sports

U.S. men’s basketball coach Gregg Popovich should not be counting on LeBron James and Anthony Davis for this summer’s Olympic team, according to a report Monday that the Lakers stars will skip the Tokyo Games.

Citing a source close to both players, The Athletic reported that James and Davis made their decisions due to their injury-plagued seasons.

James played only 45 of 72 games this season because of ankle issues. Davis appeared in just 36 games due to a variety of injuries, including a calf strain and Achilles tendinosis. He was hampered in the playoff by a groin strain and a hyperextended knee.

With both players injured during one span, the Lakers tumbled from the upper echelon of Western Conference teams and had to win a play-in game to make the playoffs.

The Lakers, who had a short offseason after winning the NBA title in the “bubble” near Orlando last summer, were beaten in the first round in six games by the Phoenix Suns last week.

Davis played about 20 minutes before getting injured in Game 4, missed the fifth game, then played just five minutes in Game 6. In his three full games vs. the Suns, he averaged 27 points, 9.3 rebounds and three assists. He averaged 21.8 points, 7.9 rebounds and 3.1 assists in the regular season.

James played all six games against the Suns and averaged 23.3 points, eight assists and 7.2 rebounds in just over 37 minutes per game. In the regular season, he averaged 25 points, 7.8 assists and 7.7 rebounds.