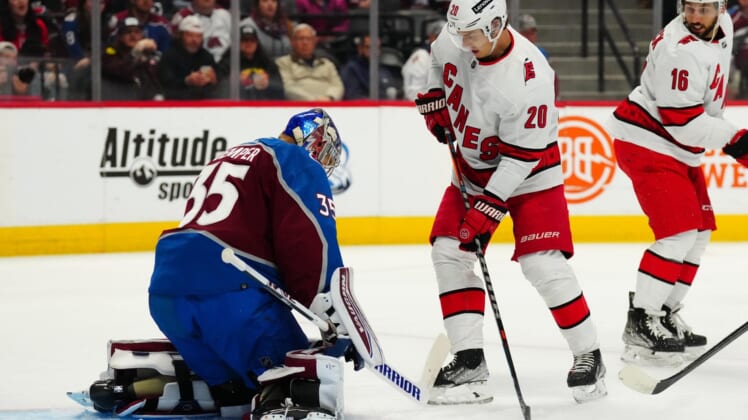 Nathan MacKinnon and J.T. Compher scored two goals apiece as the Colorado Avalanche won their ninth game in a row by defeating the Carolina Hurricanes 7-4 on Saturday night at Denver.

Ben Meyers recorded his first career goal on his first shot in his NHL debut, and Alex Newhook and Mikko Rantanen also had goals for the Avalanche (55-14-6, 116 points), who have an 11-game point streak.

Jordan Staal posted two goals and Sebastian Aho and Andrei Svechnikov also tallied for the Hurricanes (48-20-8, 104 points), who dropped into a tie for first place in the Metropolitan Division with the New York Rangers.

The big blow for the Hurricanes was a late-game injury to Frederik Andersen, who made 26 saves and allowed seven goals. Antti Raanta stopped all four shots he faced.

The Avalanche built a 4-0 lead less than 22 1/2 minutes into the game, including both of Compher’s goals, which came on power plays. Then the Hurricanes rallied with three goals in the second period, closing the gap to 5-3 going to the third period.

It was in sharp contrast to Carolina’s 2-0 home victory against the Avalanche last month.

Meyers’ goal came at 2:21 of the second period. He’s fresh off his third college season with the University of Minnesota.

Staal scored twice in the second period to make it 4-2. After Newhook scored for Colorado, Aho’s goal made it 5-3.

Staal, who had a hat trick last weekend as part of his late-game offensive surge, was gone for the game’s final 10 minutes after absorbing a big hit from Cale Makar.

Then the Hurricanes lost Andersen to a lower-body injury for the last 4 1/2 minutes.