Leafs in a flow entering back-to-back with Devils 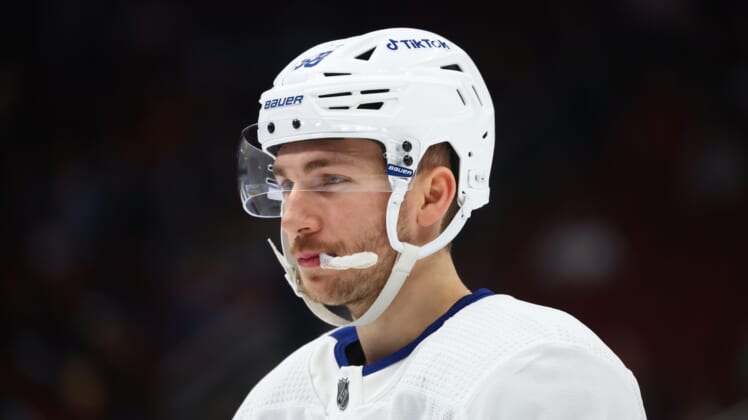 The host Toronto Maple Leafs will be out to stretch their winning streak to four games Monday night in the opener of back-to-back games against the struggling New Jersey Devils.

The Devils, who have lost four in a row, will be the home team for Tuesday’s rematch.

Toronto scored five third-period goals (two into an empty net) Saturday night while erasing a 4-2 deficit to earn a 7-4 victory over the host Detroit Red Wings.

Michael Bunting scored three goals for Toronto, his second career NHL hat trick, and none were empty-netters. His first hat trick came April 5, 2021, against the Los Angeles Kings, when he was with the Arizona Coyotes.

“Our best people made big-time plays in the third period but the most important thing was to stop the bleeding defensively,” Maple Leafs coach Sheldon Keefe said. “That’s really what we needed to do.

“I felt pretty confident that we’d be able to score at least two in that period, which was what we talked about. We wouldn’t be able to catch up if we didn’t stop the bleeding defensively.”

In the middle game of a three-game trip, the Devils lost 2-1 on Saturday to the Carolina Hurricanes. After goalie Jon Gillies allowed two goals on the first four shots he faced, he stopped the next 19.

“He bounced back and made some real good saves,” Devils coach Lindy Ruff said. “He made some good saves on that last power play, which allowed us the opportunity to pull the goaltender and try to (get the tying goal).”

After falling behind, the Devils got Jesper Boqvist’s first goal of the season late in the first period. They generally played well the rest of the way but could not finish goal-scoring chances and put only three shots on goal in the third period.

“We missed three breakaways,” Ruff said. “We had the opportunities to get back in the game and take a lead in the game in the second period and we weren’t able to capitalize on some of those key offensive opportunities.”

The Devils lost for the seventh time in their past eight games. Five of those losses have come by one goal.

“It’s not fun to lose these tight games,” Boqvist said.

The Maple Leafs, who are on a 9-2-1 roll, used backup Petr Mrazek on Saturday in the 7-4 win at Detroit. After allowing the Red Wings four goals in the first two periods, he kept the puck out of the net in the third period while the Leafs roared back from the 4-2 deficit.

“I didn’t like a few of the goals I let in,” Mrazek said after making 31 saves. “I think my strongest period was the third. We tied the game and they got some chances. but they didn’t score.

“I’m just glad we got the win. I have to clean up on some little mistakes and go from there.”

Bunting scored once in the second period and had the first two goals of the third.

“We knew going into the third period that if we were able to get the first goal of the period that we would have a good chance of winning this game,” said Bunting, now with 12 goals on the season.

Mitch Marner scored his 11th goal of the season Saturday into an empty net on a power play at 18:46 of the third period. He has scored in five consecutive games, the longest goal streak of his NHL career.