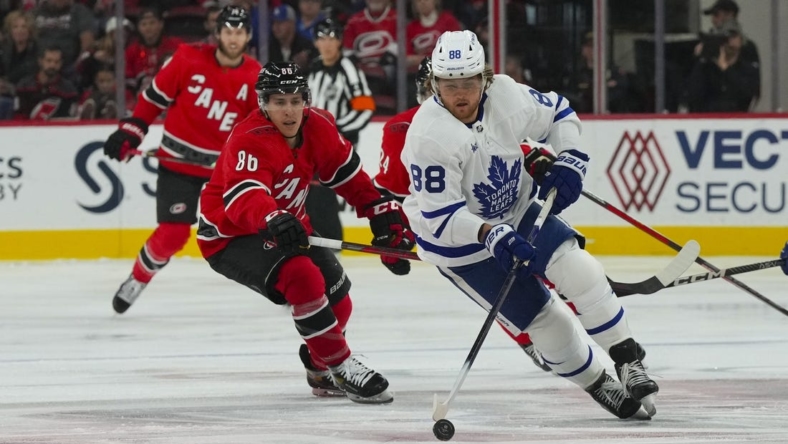 John Tavares scored his team-leading eighth goal of the season 8:24 into the third period to lift the Toronto Maple Leafs past the Carolina Hurricanes 3-1 on Sunday in Raleigh, N.C.

A pass from Mitchell Marner set up Tavares, who directed the puck into the net on Toronto’s first shot of the period.

Calle Jarnkrok scored an earlier goal and William Nylander added a late goal for Toronto, which won for just the second time in seven road games (2-3-2). The Maple Leafs have a season-high three-game winning streak and stretched their points streak to four games.

The winning goalie was Erik Kallgren, logging his first win in his fifth outing of the season by making 29 saves.

The Hurricanes had a four-game winning streak snapped despite Stefan Noesen’s goal on a first-period power play.

Noesen’s power-play goal came 8:11 into the game. It was his second goal in the past four games, and it was also the fourth straight game in which Carolina has netted a goal with the man advantage.

Jarnkrok’s goal came with 1:30 left in the second period. He collected a loose puck and unleashed a wrist shot for his third goal of the season.

After Tavares put Toronto in front, Nylander’s fifth goal of the season came off an assist from Auston Matthews. Still, the Maple Leafs had a season-low 21 shots on goal.

Prior to the game, Toronto called up goalie Keith Petruzzelli for his first NHL duty. He was the backup. Ilya Samsonov went on injured reserve after suffering a knee injury Saturday night versus the Boston Bruins.