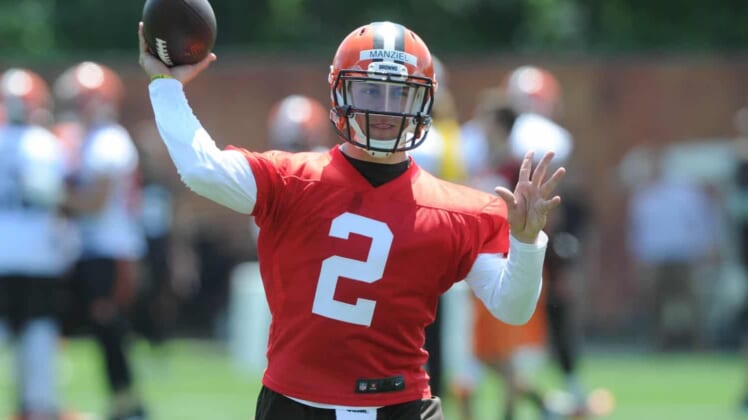 Johnny Manziel still has designs on playing in the NFL this season, according to his lawyer, Jim Darnell.

“His immediate plans are to start getting ready for football,” said Darnell, per Jeremy Fowler of ESPN.com. “We’re working on it.”

It sure has looked like Manziel’s immediate plans of late have involved booze and partying, but maybe that’s just our warped perspective.

Per Fowler, Manziel’s family is seeing the same thing we’re all seeing, however.

“This is a crisis,” the friend said. “I hope someone kicks the s— out of the kid and forces him to get right.”

First off, nobody can force Manziel to “get right.”

Secondly, before Manziel can think about playing football, he’s got a couple of other major issues to consider, the most important being his upcoming legal battle against ex-girlfriend Colleen Crowley.

Manziel’s lawyer has made it clear they will be fighting the misdemeanor assault charges levied against him by a Dallas grand jury. If he loses that battle, Manziel could face up to a year in jail.

Per Fowler, Manziel has a status hearing for this charge on June 24.

Even if he escapes legal punishment, the NFL will likely have something to say about Manziel’s conduct since the end of last season. He is likely facing a suspension at some point.

Regardless of what happens on both of those fronts, it seems highly unlikely that any NFL team would be desperate enough to sign Manziel to its squad. He appears to have lost significant weight since last season, likely due to all his partying. He also has a proven track record to this point of bringing drama wherever he goes.

Still, Manziel’s lawyer insists his client is making every effort to get back on the field. If not this year, then they’re shooting for a comeback bid in 2017. We won’t hold our breath.