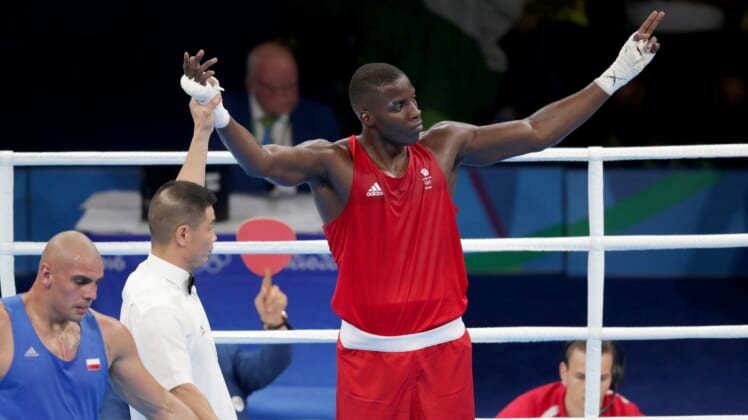 Lawrence Okolie came into the fight with a perfect 15-0 record with 12 wins coming by knockout. All of Okolie’s fights thus far have taken place in the United Kingdom.

Four of his wins have come against previously unbeaten fighters including each of his last two fights. This fight was his first shot at a world title and his first against an opponent that has won a world title.

Krzysztof Glowacki, a 13-year boxing veteran out of Poland, came into the fight with a 31-2 record and 19 wins coming by knockout. He previously held the WBO Cruiserweight title winning it in January 2015 beating Marco Huck by knockout in the 11th round.

After a successful title defense against Steve Cunningham, Glowacki lost his title to Oleksandr Usyk in April 2016 by unanimous decision. In his last bout, Glowacki was able to regain the WBO belt when he beat Maxim Vlaslov to claim the interim belt going on to later be upgraded to world champion. He subsequently lost the title against Mairis Breidis losing by a 3rd round knockout.

The fight between Glowacki and Breidis was controversial for a number of reasons in the second round. The first instance saw Breidis be deducted a point in the second round for throwing an elbow after Glowacki hit him with a rabbit punch. The second came at the end of the round when the referee did not stop the fighters when the bell rang for the round to end allowing Breidis to land a punch that sent Glowacki to the canvas.

In the aftermath of the fight, Breidis was stripped of the WBO title for not agreeing to give Glowacki an immediate rematch thereby setting up this fight between Lawrence Okolie and Krzysztof Glowacki for the now vacant belt.

Lawrence Okolie was nearly flawless all fight, using his reach advantage throwing out jabs to control distance and set up power shots. Krzysztof Glowacki struggled to mount an offense as he could not move in close enough to land meaningful shots.

In the fourth round, Glowacki was cut over his right eye due to the accumulated punishment he received from Okolie. The frustration continued to build for Glowacki as the fight continued to be a one-sided affair.

Lawrence Okolie finished the fight in the sixth round dropping Glowacki with a right hook to the jaw. Glowacki attempted to get up but was on shaky legs and the fight was waived off. This makes Okolie the seventh British world champion in the cruiserweight division and the first since Tony Bellew won the WBC Cruiserweight title in May 2016.

In his post-fight interview, Okolie spoke about wanting to unify his cruiserweight title in a bout against IBF Cruiserweight champion Mairis Breidis before eventually moving up to the heavyweight division.