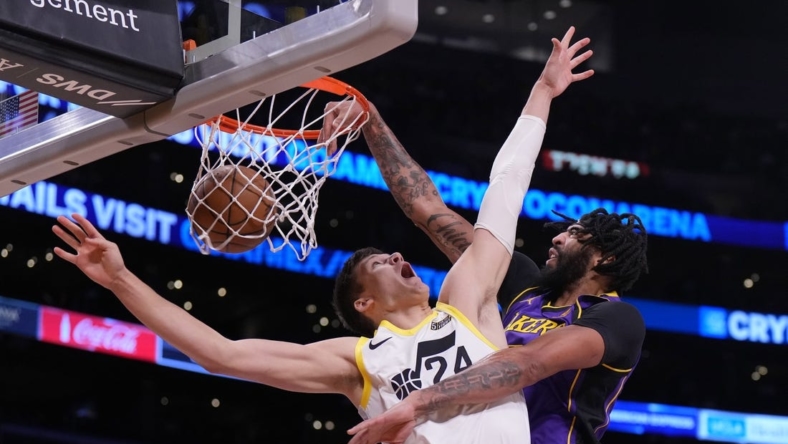 Lauri Markkanen continued his strong play this season, scoring 27 points with 13 rebounds to lead the Utah Jazz to a 130-116 victory over the host Los Angeles Lakers on Friday night.

Russell Westbrook led the Lakers with 28 points on 9-of-14 shooting off the bench. Anthony Davis scored 22 points, but only two after halftime, and grabbed eight rebounds, and LeBron James tallied 17 points with 10 rebounds and eight assists. Lonnie Walker IV added 17.

The Jazz shot the lights out, hitting 50.5 percent overall and drilling 17 3-pointers, including 3 apiece by Markkanen, Olynyk and Sexton.

Los Angeles was never able to get closer than five the rest of the way.

Utah, which has won seven of 10 this season, got off to a blistering start, shooting 65.4 percent while taking a 40-34 lead after the first quarter.

But the Jazz quickly found their groove, beginning with back-to-back 3s from Sexton during a 10-2 surge. Utah finished the first half up 75-62 — the second time Utah has scored 75 in an opening half this year — thanks to 60.8 percent shooting overall and 9-of-17 accuracy from 3-point range.

Olynyk matched the Jazz’s biggest lead of 16, 85-69, with a layup with 8:04 remaining in the third quarter. The Lakers scored seven straight and continued to chip away, led by Westbrook, to pull within two late in the third.

Los Angeles hosts Cleveland on Sunday afternoon before heading to Utah for a Monday rematch. The Jazz remain in L.A. to face the Clippers on Sunday night.