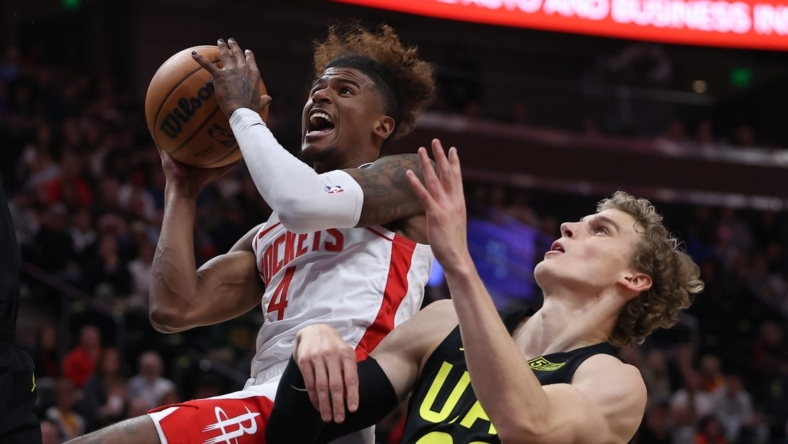 Lauri Markkanen scored 24 points and grabbed nine rebounds and Jordan Clarkson finished with 20 points as the Utah Jazz held off the Houston Rockets for a 109-101 win Wednesday night in Salt Lake City.

Talen Horton-Tucker and Malik Beasley each added 14 points and Mike Conley contributed 13. Utah avenged its only loss of the season, a 114-108 setback in Houston on Monday, as the teams completed a home-and-home set.

Kevin Porter Jr. helped make things interesting in the fourth quarter, when he scored 15 of his 24 points as the Rockets rallied from down 19 in the third quarter to pull within two midway through the fourth quarter. Jalen Green scored 17 points, Eric Gordon had 16 and Kenyon Martin Jr. tallied 11 points and 10 rebounds in the defeat.

Usman Garuba ignited a Rocket comeback attempt with a dunk in the final seconds of the third quarter. Houston then pulled within 89-83 early in the fourth quarter after four close-range Porter Jr. buckets.

Markkanen converted an alley-pop dunk off a pass from Clarkson with 7:04 remaining to interrupt Houston’s 16-3 surge. But the Rockets got within three again before Beasley hit a 3 for a 97-91 Jazz lead.

Porter whittled the Jazz lead down to two at 5:17 with a pull-up jumper after a pair of Garrison Matthews free throws.

Horton-Tucker, Olynyk and Markkanen helped go back up by five with free throws.

The Jazz got some breathing room down the stretch off of a Markkanen dunk with 3:13 remaining and a triple by Beasley with just under a minute to go.

This was Houston’s third road loss on the season and began a stretch in which the Rockets play eight of nine away from home, including contests at Portland, Phoenix and Los Angeles (Clippers) later this week.

The teams combined for 58 fouls, with Utah’s Jarred Vanderbilt and Kelly Olynyk both fouling out well before the end of regulation.

Utah forced a Houston timeout in the third after Clarkson blocked a shot on one end and drained a 3 off of a fast-break pass from Markkanen on the other. Horton-Tucker followed with one of the highlights, exploding for a dunk while being fouled and then hitting the free throw. That gave the Jazz their largest lead at 77–58.

Houston only trailed by one, 22-21, after the first quarter and was within two early in the second after consecutive Garrison Mathews 3-pointers made it 36-34.

The Jazz scored six straight and then ended the first half on a 14-8 surge. That gave Utah a 61-49 halftime advantage, with Markkanen leading the way with 15 points in the first two quarters.

Collin Sexton didn’t play the second half for Utah after suffering a left oblique contusion.