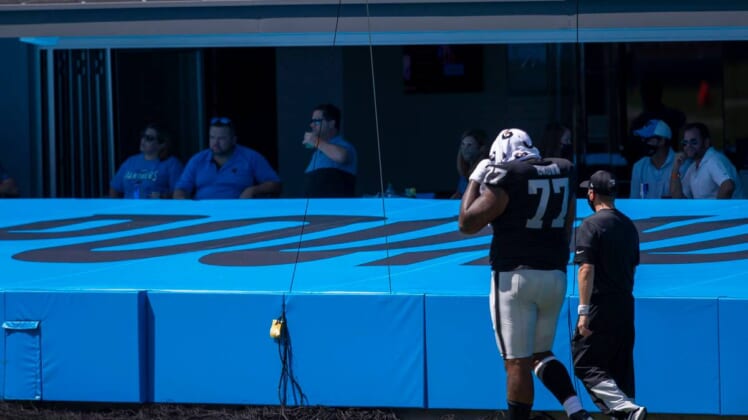 There’s never been any question about the ability and talent the Raiders offensive tackle brings to the stout offensive line. Yet the latest Trent Brown injury may significantly impact his future in Las Vegas.

When Trent Brown signed the four-year $66 million contract that made him the highest-paid offensive lineman in NFL history at the time, Raiders fans were thrilled that quarterback Derek Carr would have such a stud protecting him. However, his time with the Raiders has been characterized by missed time. Trent Brown’s latest injury came just three plays into the Raiders 2020 season opener against the Carolina Panthers and might impact his future with the team.

Backup Sam Young left Sunday’s game shortly after Brown did, leaving guard Denzelle Good to play a foreign position where he performed admirably. Although Brown’s injury is being reported as only minor, the early loss of the team’s big offensive tackle, is a big concern moving forward. It has many questioning if Brown actually wants to play.

With Brown taking up so much of the team’s salary cap space, the Raiders will need to make a decision as to where he fits in their future plans. If they do decide to move on, then they will be best off to wait until this season concludes as Brown’s contract would not count as dead money against the cap.

While Brown is a great football player when he is on the field, the fact that he struggled so much to stay on it may mean those dollars are better spent elsewhere.

It’s no secret just how much coach Jon Gruden admires players who are willing to play through pain. He routinely has publicly praised players such as rookie wide receiver Henry Ruggs, who left the game against Carolina after being tackled awkwardly but eventually returned.

“I like the fact that he came back and played through something,” Gruden said during his Monday press conference.”That’s what the great ones do. They play through pain.”

With Gruden placing such a strong emphasis on the ability to be a warrior, and Brown not showing those values that the coach loves, Brown could potentially soon be on the way out of Las Vegas. He is extremely talented but the best ability is availability and Brown hasn’t shown enough availability yet.