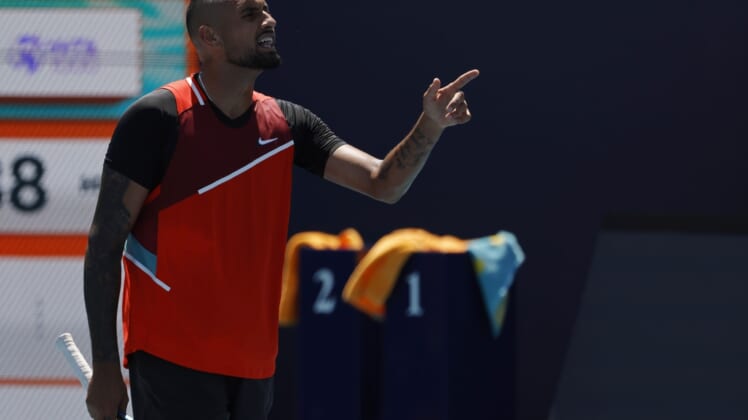 Australia’s Nick Kyrgios has incurred the wrath of the ATP Tour yet again, earning $35,000 worth of fines for his behavior in a match Tuesday at the Miami Open.

The oft-disciplined Kyrgios was fined $20,000 for verbal abuse of a chair umpire, $5,000 for an audible obscenity and received two $5,000 fines for unsportsmanlike conduct.

Kyrgios was in the midst of a 7-6 (3), 6-3 Round of 16 loss Tuesday to Italy’s Jannik Sinner when he lost his composure. Issues began early in the match when Kyrgios complained about the speed of the court.

When the crowd grew louder as complaints continued, Kyrgios began to berate the chair umpire.

It is just the latest incident for Kyrgios, who had a back-and-forth with a fan at Indian Wells, Calif., earlier this month as he objected to getting unsolicited advice from the crowd.

He was fined as much as $113,000 for his behavior at the 2019 Cincinnati Masters, admitted that he “probably” tanked matches over the years when he lost interest and directed insults at Stan Wawrinka during a 2015 match, among other incidents.