Late TD lifts No. 22 Kentucky over No. 15 Iowa in Citrus Bowl 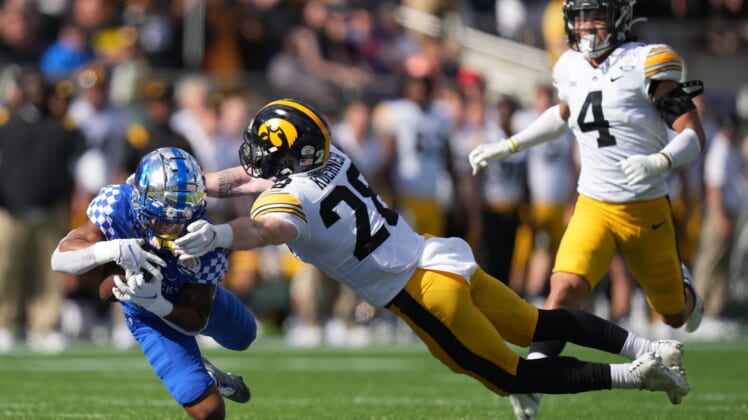 Rodriguez broke a tackle behind the line of scrimmage and powered around left end for the play that capped his 107-yard day on the ground on 20 carries for Kentucky (10-3).

Wan’Dale Robinson set up the winning score with a 52-yard reception to the Hawkeyes’ 1-yard line, the last of his 10 catches for 170 yards.

Iowa (10-4) had a chance to tie or win on its last possession, but Kentucky’s Deandre Square made a diving interception of Spencer Petras’ forced pass over the middle at the Wildcats’ 26-yard line with 48 seconds remaining.

Petras completed 19 of 30 passes for 211 yards and a touchdown, with three interceptions. He put Iowa ahead 17-13 when he connected with Sam LaPorta, who caught seven passes for 122 yards, on a tight-end screen that resulted in a 36-yard score with 10:54 remaining in the game.

Will Levis hit on 17 of 28 passes for 233 yards as Kentucky finished its second 10-win season in four years. Levis absorbed six sacks from the Hawkeyes.
Kentucky was outgained 384-354 but controlled the ball for nearly 38 minutes.

Kentucky controlled most of the first half, beginning with its opening drive. The Wildcats marched 80 yards on 13 plays, chewing up nearly 7 1/2 minutes and taking a 7-0 lead when Levis found Rodriguez for a 5-yard touchdown pass.

Iowa got on the board with 11:03 left in the half on Caleb Shudak’s 28-yard field goal, finishing a drive that lasted almost five minutes. But Iowa’s offense couldn’t build on that for the remainder of the half.

Kentucky added to its lead with a pair of short field goals by Matt Ruffolo. The first was from 21 yards at the 2:48 mark, capping a drive that lasted 8:15. The second was a 27-yarder with 38 seconds remaining, occurring five plays after a Petras interception.