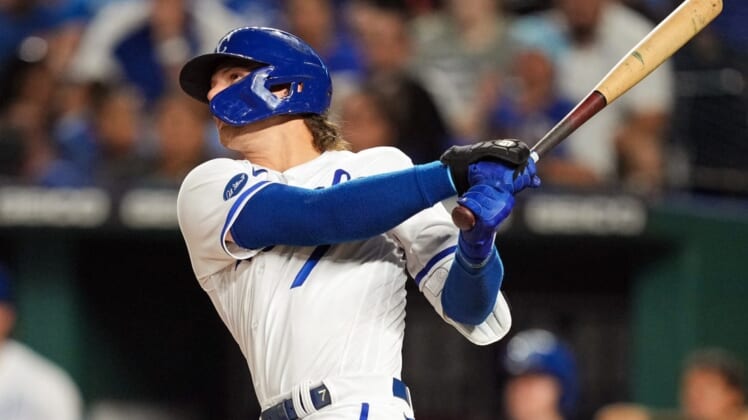 Christian Walker and Alek Thomas each had three hits to help the visiting Arizona Diamondbacks to a 7-3 win against the Kansas City Royals in the opener of a two-game series on Tuesday night.

Jake McCarthy and Emmanuel Rivera each had two hits and an RBI for the Diamondbacks, who ended a three-game losing streak.

Arizona starter Zach Davies allowed one run and two hits in 5 2/3 innings. He struck out one and walked two on 84 pitches but did not factor into the decision.

Bobby Witt Jr. homered, tripled and scored twice for the Royals, who have lost seven of nine.

Royals starter Jonathan Heasley became ill and was unable to finish the fifth inning. He had not allowed a run through 4 2/3 innings, surrendering four hits, striking out two and walking four.

Davies retired the first 10 batters he faced before Witt lifted a 2-0 sinker high and deep over the fence in left field for a 1-0 lead.

Heasley retired the first two batters of the fifth inning on three pitches before crouching behind the mound and falling ill for a third time.

Heasley was replaced by Jose Cuas, who recorded the final out and then came back out for the sixth, but the Diamondbacks rallied to tie the score on a two-out single by Geraldo Perdomo to make it 1-1.

Arizona put runners on second and third with one out in the seventh when Walker’s single off Josh Staumont (3-3) got under the glove of MJ Melendez in left. After Daulton Varsho walked, McCarthy followed with a sacrifice fly to give Arizona a 2-1 lead.

The Diamondbacks tacked on three runs in the eighth and on a sacrifice fly, an RBI double by Walker and a wild pitch to take a 5-1 lead.

The Royals got two runs back in the eighth on a sacrifice fly and an RBI single by Salvador Perez to make it 5-3.

Arizona responded in the ninth on a two-out RBI single by Josh Rojas and a ground-rule RBI double by Rivera to make it 7-3.