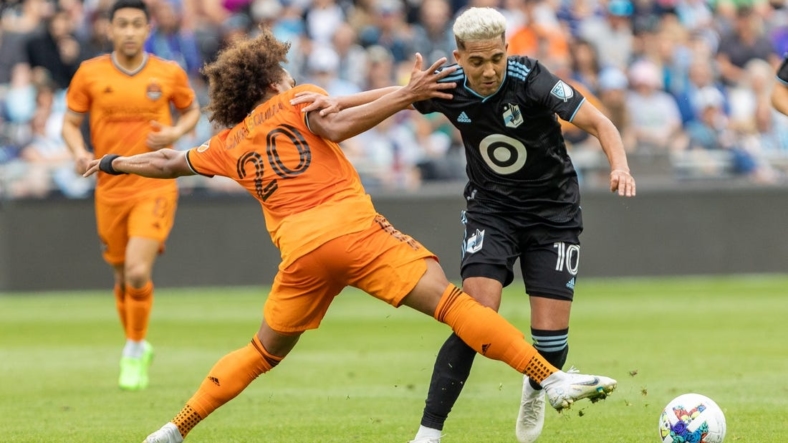 Luis Amarilla scored in the 84th minute as Minnesota United rallied for a 2-1 victory over the visiting Houston Dynamo on Saturday afternoon.

Amarilla’s finish of Alan Benitez’s low cross lifted Minnesota (13-9-5, 44 points) to an eighth win in 11 matches only five minutes after they tied the game through an own goal. It was Amarilla’s ninth of the season

Emanuel Reynoso took a free kick from just outside of the penalty area on the equalizer when it took a significant deflection off Houston’s Fafa Picault before sailing past wrong-footed goalkeeper Steve Clark and into the net.

The victory lifts Minnesota United into third place in the Western Conference, two points ahead of FC Dallas, which plays later Saturday.

Corey Baird scored his first goal of the season for the Dynamo (7-15-5, 26 points), who are winless over their last six games, with five defeats. Griffin Dorsey provided the assist.

Baird scored in first-half stoppage time on the first shot on target for either side.

Dorsey spotted him open on the far side of the penalty area with an early cross from the right. Goalkeeper Dayne St. Clair charged off his line and Baird spun the ball neatly over the goalkeeper and under the crossbar to give the visitors the lead.

Amarilla missed on a pair of opportunities inside the opening 16 minutes after the break. On the other end St. Clair did well to push away Sebastian Ferreira’s ferocious volley from about 10 yards out in the 63rd minute.

Amarilla was then caught offside in the 71st minute to erase a game-tying score.

Eight minutes later, Reynoso took a chance from outside the box and it paid off to make it 1-1, although he couldn’t claim his team-leading 11th goal of the year.

Reynoso also was involved in the winner, playing a slick give-and-go with Benitez to free him down the right. Bhongokhule Hlongwane made a run to the near post, and Amarilla filled in the space behind to meet Benitez’s cross near the penalty spot and guide a first-touch finish into the net.