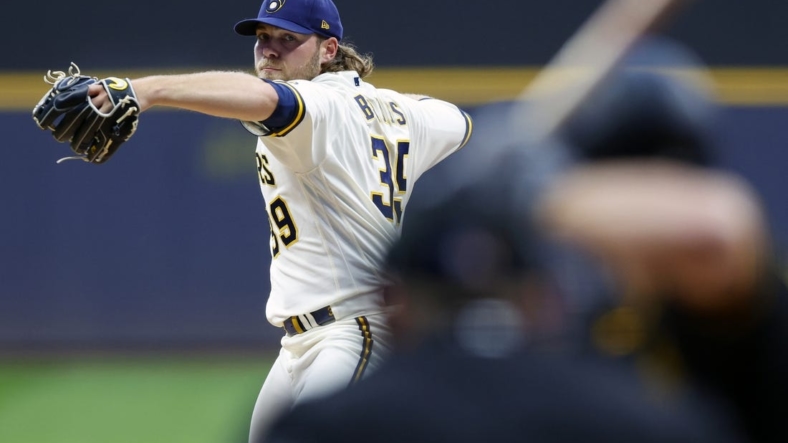 Keston Hiura hit a two-run, walk-off home run in the ninth inning to lift the Milwaukee Brewers to a 7-5 win against the visiting Pittsburgh Pirates in the opener of a three-game series on Monday night.

Milwaukee’s Garrett Mitchell hit his first major league home run, a two-run shot with two outs in the eighth inning to tie the score 5-5. Hunter Renfroe had three hits and two RBIs and Willy Adames had three hits and scored twice for the Brewers, who ended a five-game losing streak against Pittsburgh.

The Pirates lost for the eighth time in nine games overall, while the Brewers won their third in a row.

Brewers starter Corbin Burnes allowed five runs and eight hits in six innings. He struck out five and walked one. Devin Williams (5-3) pitched a scoreless ninth to earn the win.

Bryse Wilson was a late fill-in as Pittsburgh’s starting pitcher after JT Brubaker went on the paternity list on Sunday. He allowed three runs and five hits in three innings while striking out two and walking two.

Pirates reliever Duane Underwood Jr. departed with two outs in the eighth after walking Omar Narvaez. Wil Crowe came in, and Mitchell hit his second pitch over the fence in right-center field to tie the score 5-5. Mitchell was playing in his third major league game.

Adames drove in Christian Yelich with an RBI single for a 1-0 lead in the third inning, but Yelich was later thrown out at home on a single by Rowdy Tellez. The next batter, Renfroe, came through with an opposite-field double to score two runs and give Milwaukee a 3-0 lead.

Kevin Newman and Tucupita Marcano strung together one-out singles to put runners on the corners for the Pirates in the fifth inning. Jason Delay hit an RBI single to make it 3-1, and Cruz then bashed a 437-foot home run into the second deck in right to give the Pirates a 4-3 lead.

Cruz hit six of his 11 home runs against Milwaukee this season.

Castro hit a solo home run in the sixth to extend the Pirates’ lead to 5-3.