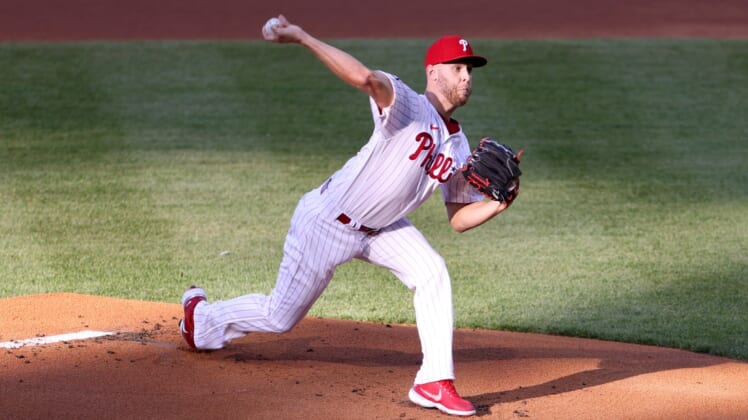 Michael Conforto’s solo home run off Hector Neris to lead off the ninth inning lifted the New York Mets past the host Philadelphia Phillies 5-4 on Saturday.

Conforto also doubled, drove in three runs and scored twice. He has 21 homers in his career against the Phillies. Pete Alonso and Dominic Smith had two hits apiece for the Mets.

Mets starter Taijuan Walker allowed seven hits and four runs in six innings. He struck out four and walked one.

Trevor May (2-1) earned the win in relief. Edwin Diaz tossed a scoreless ninth for his third save in three opportunities.

Bryce Harper (face) and J.T. Realmuto (hand) were held out of the lineup again.

Phillies starter Zack Wheeler tossed 97 pitches (67 strikes) in seven innings. He gave up seven hits and four runs while striking out six and walking one.

The Mets jumped out to a 4-0 lead in the first inning, starting when Alonso lined an RBI ground rule double to center field. Conforto followed with a double to left, a drive that eluded Andrew McCutchen and allowed two more runs to score. J.D. Davis’ RBI single capped the inning.

In the second, the Phillies cut the deficit in half on an RBI groundout by Andrew Knapp and Wheeler’s run-scoring single.

In the bottom of the sixth, Bohm blasted a two-run home run to right to tie the game at 4.

Wheeler rebounded after the first inning, and retired 11 batters in a row during one stretch.

Brandon Nimmo left the game with two outs and a 1-2 count in the seventh with an undetermined injury. Nimmo had been nursing a hip ailment.

After McCutchen was called for running out of the basepath in the seventh, Harper was ejected from the dugout for protesting.