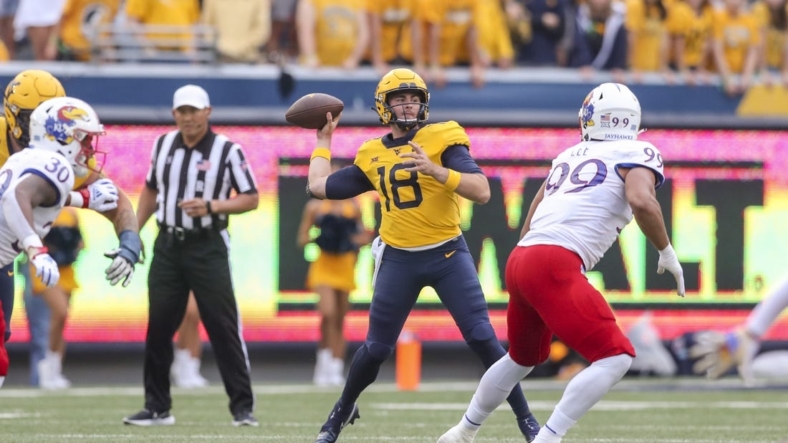 West Virginia drove 85 yards in 1:42 for a touchdown with 35 seconds left in regulation, then converted a 2-point conversion to tie it.

WVU’s JT Daniels found Sam James with a 59-yard touchdown pass on the fourth play from scrimmage. Following a Kansas punt, the Mountaineers drove 60 yards in 12 plays to take a 14-0 lead on a 1-yard run by CJ Donaldson.

Kansas got on the board on the first play of the second quarter when Jalon Daniels found Mason Fairchild for a 10-yard touchdown. But another big play hurt Kansas, when JT Daniels connected with Bryce Ford-Wheaton on a bubble screen that went 67 yards for the score.

Once again, Kansas responded with a long drive, going 75 yards in 11 plays. Running back Devin Neal took a direct snap and hustled in for a 6-yard score, cutting the West Virginia lead to 21-14.

Ford-Wheaton caught his second touchdown, this one from 5 yards out, to put the Mountaineers up by two touchdowns with 3:11 left in the half.

But Neal caught a 17-yard touchdown pass from Jalon Daniels with 29 seconds left in the half. The teams combined for 475 yards and 49 points in the first half.

Daniel Hishaw tied the score on the opening drive of the second half. Jalon Daniels hit Skinner for a 40-yard gain, setting up the Jayhawks at the 3-yard line. Hishaw punched it in on the next play.

Following a muffed punt, Neal scored a 2-yard touchdown to put KU ahead.

Kansas forced a WVU field goal attempt and Hishaw put the Jayhawks up 11 with a 30-yard run in the fourth. West Virginia got the ball to the 1-yard line, but two penalties forced a field goal.