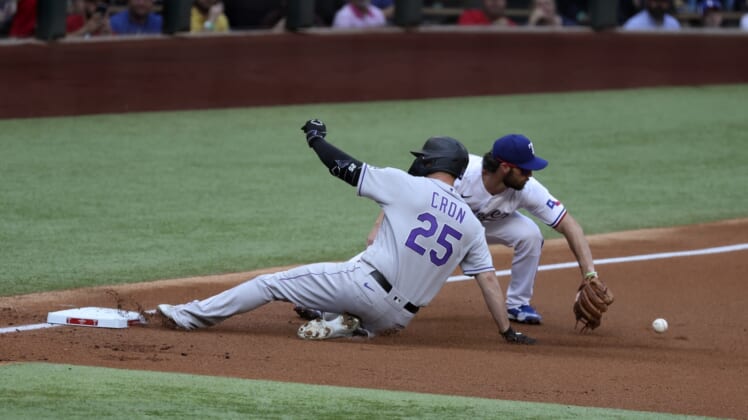 Connor Joe and C.J. Cron homered and finished with two hits each, Jose Iglesias had four hits and the Colorado Rockies beat the Texas Rangers 6-4 in Arlington, Texas, on Monday.

Kris Bryant and Elias Diaz had two apiece and Ashton Goudeau picked up his first career save for Colorado, which has won three straight.

Willie Calhoun homered and Adolis Garcia had two hits and two RBIs for Texas, which lost its home opener.

Cron’s solo homer in the top of the ninth — his second of the season — made it 4-3 but Calhoun tied it with a two-out home run off of Daniel Bard (1-0).

Iglesias put the Rockies ahead in the 10th with an RBI single off of Greg Holland (0-1) but was thrown out at second. Joe followed with his second homer of the season.

The Rangers appeared to score on Garcia’s grounder in the bottom of the inning but a slide interference wiped out the run and ended the game.

Colorado scored when Bryant reached on a double in the first and Cron tripled to center to make it 1-0.

Taylor Hearn blanked the Rockies the rest of the way. He allowed one run on eight hits and struck out six in four innings.

Texas got the run back in the fourth when Garcia drew a one-out walk and scored on Nathaniel Lowe’s doubled to right off Rockies starter Austin Gomber.

The Rangers then went ahead in the fifth. Charlie Culberson singled with one out and Corey Seager’s two-out single to put runners on the corners and ended Gomber’s day.

Justin Lawrence came on and walked Mitch Garver to load the bases and Garcia’s two-run single gave Texas a 3-1 lead.

Gomber allowed three runs on four hits and struck out four in 4 2/3 innings.

Colorado answered in the seventh when Bryant singled, moved to second on Matt Bush’s wild pitch and scored when Brendan Rodgers reached on an error by Culberson.

The Rockies tied it in the eighth on another miscue. Iglesias reached on a forceout to erase Diaz, who had singled to lead off. Joe walked and Blackmon grounded into a fielder’s choice, but Seager’s throwing error allowed Iglesias to make it 3-3.